Local 598 members opened their hearts and wallets to provide thousands of toys for the annual Toys for Tots campaign that were displayed at the union hall on Sunday.

FLINT TWP. — Many came bearing gifts to add to an already huge pile of toys fronting the stage at UAW Local 598 for its annual Toys for Tots campaign.

This year, most of the toys were purchased with more than $7,000 raised through Kernels for Cash, an in-plant sale of popcorn to Flint Assembly employees and UAW Local 598 members.

The fundraising idea stemmed from a donated old movies popcorn machine, said Ryan Buchalski, 598 vice president and master of ceremonies at the Sunday event. Bags of popcorn were sold for $1 each but some buyers donated as much as $5 to the cause, Buchalski said.

Other members contributed cash donations by growing a beard to win a bet or conducting mini collection drives through other affixations.

Toy contributions also included a donation from the United Way of 500 plastic trucks that were made in Walled Lake Michigan, Buchalski said.

The results of the drive displayed in the union hall caused one observer to comment that it looked like a visit to Toys R Us with bicycles lining the aisles and toys in front of the stage stacked shoulderhigh. 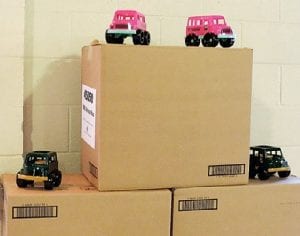 But the need is great. More than 1,200 families have signed up for help this year, according to Mike Reynolds, a retired Local 598 member and volunteer with Toys for Tots since 1982.

Reynolds presented the Commanders Award – the highest honor bestowed by the Marine Corps Reserve — to Local 598 and to Flint Assembly workers.

“What you guys have done today is amazing and will help a lot,” Reynolds said.

Judge Beagle read an original poem that managed to incorporate season’s greetings with a shout-out to the Michigan State University Spartans football victory and also acknowledged the death and legacy of South African leader Nelson Mandela. 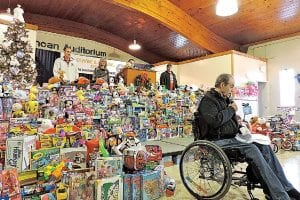 Judge Farah presented a gift certificate from Thompson Creek Turkey Farm to provide Christmas dinner for a down-onits luck family of four. In a nation becoming increasingly divided between the haves and have-nots, Farah said he felt fortunate to be among the haves.

“If you have, you give,” he said. “You give without being asked, you give out of a sense of joy and not duty. You give because there is a need you can help fill.”

He commended Local 598 for its ongoing efforts.

“So many children who would go without now do not because of you folks here at Local 598,” Farah said.

Lois Craig of Special Olympics Michigan also presented an award to Local 598 for its contributions to children’s events this year.

The event wrapped up with singing by a children’s group affiliated with Motherly Intercession, a non-profit that works to better the lives of children of incarcerated parents. 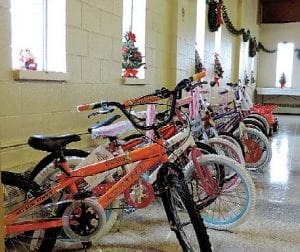 Bikes and other kiddie vehicles lined the aisles at the union hall during the Toys for Tots presentation.