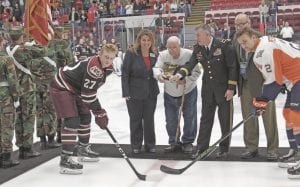 FLINT — Jerry Ponder, 90 of Flint, was honored Friday Night Nov. 11 at the Military Appreciation Night at the Flint Firebirds game. He is a World War II Navy veteran serving from 1943-46. Ponder’s family surprised him with the nomination through NASH FM and he was chosen as the service member to drop the puck. Ponder was a season ticket holder for the Flint Generals from 1969-1998 and hadn’t been to a hockey game in 10 years. He was deeply honored by the VIP treatment he received from the Flint Firebirds. – L.P.