Story and photos by Gary Gould 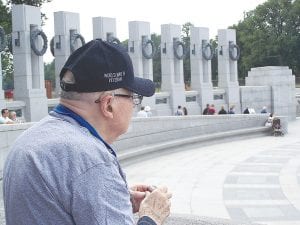 Tom Burns of Burton stopping to take pictures of the memorial.

WASHINGTON D.C. — If a group of World War II veterans from Genesee County didn’t already know how much their service to this country meant to younger generations of Americans, they do now.

Thirty-seven veterans from this area left on a one-day trip to Washington, D.C., June 18 to visit the World War II Memorial. The group gathered early Sunday morning at the Knights of Columbus Hall in Davison Township before boarding a charter bus to Ann Arbor.

In Ann Arbor, during a bus change-over at Domino Farms, the group was greeted by members of the Patriot Guard Riders, a motorcycle service organization that supports veterans.

“Thank you for your service,” members of the group told the aging vets as they walked past an honor guard arranged for them. “Thank you for my freedom.”

The group then boarded Veterans Administration buses that took them to Detroit Metro Airport. There they boarded a plane for Baltimore, Md. 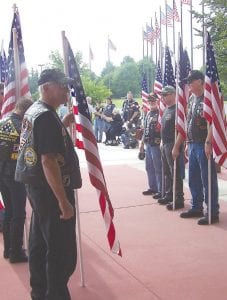 An honor guard arranged by the Michigan Patriot Guard Riders at Domino Farms in Ann Arbor.

During the bus trip and plane flight, the veterans began to develop a sense of camaraderie — almost as if they were back in the service again.

Davison vet Elmer Leach, 92, who said before the trip he hoped he would reconnect with someone from his Army unit during the trip, rolled around in his wheelchair patting his new friends on the shoulder, proclaiming to each: “Hi there, buddy!”

Also in the Metro terminal the men were treated to lunch by National Coney Island who served box lunches consisting of wrap sandwiches, chips and water.

John Kilimas, district manager for National Coney Island, said his restaurant provides the meals at cost and he praised the trip organizers.

“I think its great,” he said of the Pride and Honor Flight. “If it weren’t for these guys we wouldn’t be here.”

In Baltimore members of a local organization who receive Pride and Honor Flight participants when they arrive at the airport greeted them. Again the veterans were thanked for their service. 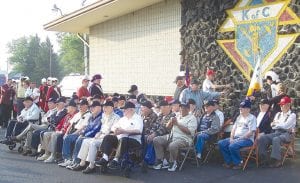 Genesee County veterans gather in front of the Davison Knights of Columbus Hall for a group photo prior to departing for Detroit Metro Airport.

Buses then transported them to the memorial, located in the National Mall between the Lincoln Memorial and the Washington Monument.

Waiting for the vets when they disembarked the buses was former Sen. Bob Dole, himself a veteran of World War II and a strong advocate for the construction of the memorial.

Dole, 87, posed with the former soldiers after waiting several hours at the memorial following a stop to see an earlier group of Pride and Honor participants that morning.

James Connon of Lapeer, a Navy veteran, was surprised when he arrived at the memorial and was greeted by his granddaughter, Marine 2nd Lt. Rachel Connon, also of Lapeer.

“This was a great opportunity. It’s great to have that connection to my grandfather,” she said.

At the memorial young people who thanked them for their service to the country routinely stopped veterans. 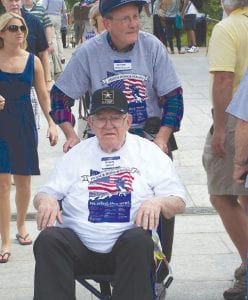 Elmer Leach of Davison visiting the memorial, pushed along in his wheelchair by guardian William Goodfellow of Davison.

Returning home, the veterans were tired from their trip, but all were in good spirits.

Lloyd Coon of Swartz Creek said he was taken aback by the reception they received from people, especially the cheering crowd in Baltimore.

“When I got off that plane in Baltimore, the reception they gave us,” he said. “I’ll admit it, I choked up.”

Tom Burns of Burton also had nothing but praise for the trip and for the people they met along the way.

“It speaks well of America to greet us like this,” he said of the reception in the Baltimore terminal.

Rudy Bolf, a member of the Davison Knights of Columbus who raised the money for the trip, thanked everyone who donated to the cause and who turned out in support of the veterans.

“This is an extraordinary group of guys,” said Bolf, of Otisville. “These guys deserve this.” 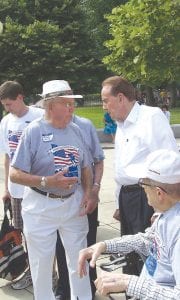 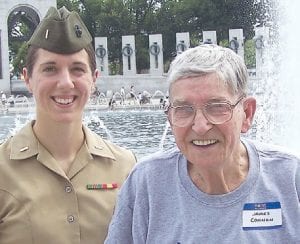 James Connon of Lapeer was surprised by a visit from granddaughter Rachel Connon. She is a 2nd lieutenant in the U.S. Marine Corps.