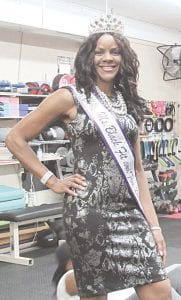 Patty Williams shares the story of her healthy journey at her business, New Beginnings Fitness Center. Williams won the title of Ms. Black Fit & Fine in a pageant for African-American women over the age of 50. Photo by Jalene Jameson

She died of a heart attack at the age of 54, the same age Williams is now. Williams’ mother had had heart palpitations and had seen a doctor just days before her death, only to be told there was nothing wrong with her. Williams, a Flint Township resident, saw the Ms. Black Fit and Fine pageant as a way to share her experience and her message that African-American women, especially those over 50, need to take better care of themselves. The pageant promotes the longterm benefits of living a healthy lifestyle

“Most doctors feel like we’re whining or complaining,” Williams said. “That’s what happened to my mother. She was telling her doctor she was having heart palpitations. She was in the hospital, but they sent her home on Thursday. They told her there wasn’t anything wrong. She called me on Friday and asked me if I would videotape her singing in church on Sunday. Saturday I got a call from my sister at 11 o’clock telling me I needed to come to my mom’s house. I prayed all the way there.”

Williams’ mother had passed away, part of a family legacy that saw six of her nine siblings die before the age of 60. Despite working out and staying fit, Williams was convinced that would be her fate, too.

She didn’t know how close to being right she was. She learned from her doctor in May 2014 that she had high blood pressure, high cholesterol and was under a lot of stress. Her blood pressure was 199/100, and the doctor refused to let her leave the office until it went down. The following week, it was still high, and the doctor told Williams she was in stroke mode.

“Even though I felt healthy, and I thought I looked heathy, I actually wasn’t,” she said. “So I ended up changing my diet and became a vegetarian. That helped me out, but it still wasn’t enough because I still had high blood pressure. At the beginning of January, I made a commitment that I was no longer going to put salt in my food. Six months later my blood pressure started to go down. It still wasn’t enough for me, so I became a vegan three months ago, and now I’m no longer on my blood pressure medicine.”

A friend told Williams about the Ms. Black Fit & Fine pageant, which was held Sept. 21 in Southfield. She talked with her family about the huge commitment it would take to prepare for the competition and prayed about it. Once she decided to enter, she spent a year getting ready. Williams has been a personal trainer for more than 25 years and is the owner/operator of New Beginnings Fitness Center, 3601 Beecher Road in Flint. Her son and husband trained her for the pageant, and her daughter helped her with hair and makeup. She attributes her mental preparation to the support of her husband, friends, family, church, fitness center community and her publicist, Denise Smith Allen.

Thirteen women competed in the pageant, including one woman who was 82 years old. They were judged on talent, interview and evening gown. Williams performed a step aerobics routine with Phil Weeden of Extreme Hip Hop Step. Along with her crown, Williams received $2,500, two gift certificates and a trophy. Williams said about 50 to 75 supporters traveled to Southfield to see her compete.

Williams said anyone can get fit and healthy if they commit to eating the right foods, exercising and getting enough sleep. In addition to her hereditary health issues, she has been in two car accidents resulting in a rod in her femur that extends from her hip to her knee and two back surgeries. She said she wants women over the age of 50 to know there’s no excuse for not living a healthy life and that anyone can start slowly and build toward a healthy lifestyle.

Over the next year as Ms. Black Fit & Fine 2019, Williams plans to bring her message about a healthy living to her church community, senior centers and schools. She has already appeared at the Black Health Expo at the Flint Farmers Market and has been taking healthy food to the UAW picket line during the strike.

“If I could save just one person, that’s what’s important to me,” Williams said