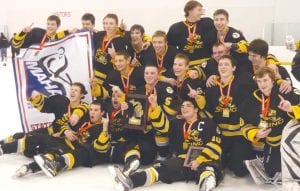 Local talent that had previously played for the Lapeer Storm Midget A team that won the International Silver Sticks national title last season after going 11-0, include Metamora resident Myles Burrough, Davison’s Steven Arterburn, Justin Fisher of Flushing, Grand Blanc’s Ryan Griggs and Owosso’s Derek Compeau. With the exception of Arterburn, the four others have played hockey together for years. Once the Lapeer Storm team lost too many members to continue on, there was no other place for them to play locally, says Sting team manager Mike Compeau. Other team members come from Warren, Berkley, Sterling Heights, Owosso, Macomb, Rochester, Shelby Township and Allenton.

Burrough, a 6-foot 150 lb. forward had two assists in the Stings 6-1 semifinal win over Westland on Sunday. Arterburn also had two and Fisher chipped in with one. In the championship game, Compeau had one goal, Burrough and Fisher had two assists each, and Griggs had one assist.

“All of the local kids except Arterburn are from that Lapeer Storm team and the kids have played together for a number of years,” Compeau said. “That team broke up last year and the kids had no Midget AA team to play for, so they all tried out for the Troy Sting, and all of them made the team.”

Also part of that winning Storm team and returning back to their high school hockey teams were Swartz Creek’s Nick Webb and Derek Makimaa and Lapeer West’s Jacob Podgorski. Webb broke the Swartz Creek school assist mark at 50 this season and also shattered the points mark with 90, previously held by Trevor Cope.

Compeau added that the kids travel to practice three nights, something they have been doing since last September. Sunday marked their 70th game.

“Their goal was to win the state title and lo and behold, they did,” Compeau said. “These kids don’t get much recognition because they play travel hockey. They are on the ice five nights a week, attend school, and some have part time jobs. They are good citizens in their community and none have missed a practice. It takes being a good student, good person, good citizen. They don’t settle for anything but the top.”

At the helm of the Sting is coach Fred Costello, a 17-year veteran coach of travel, AAA and junior A hockey programs. He is assisted by Andy Oleksy and Rick Pascany, and also has two national titles to his name. Compeau said his ability to hold 20 18-year-olds together was “like something I have never seen”.

“The kids play at a different level and have a much higher commitment in hockey than a typical high school player,” Compeau stressed. “The coach puts the emphasis on the kids and makes them police themselves, their conduct and the team conduct and work ethic.”

The Stings National tournament first game is slated for 1:15 p.m. on March 30 in Cleveland, but the opponent has yet to be determined.