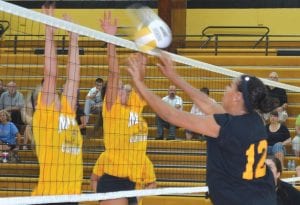 The Black Team got edged out by the Gold at the annual Bruin Classic All Star volleyball game at Mott Community College on June 19.

FLINT — In the face of plus 90- degree weather all week long, the gym at Mott Community College on June 19 proved to be a hot box of area talent, all who gathered to play in the volleyball portion of the annual Bruin Classic All-Star showcase for newly graduated high school seniors. Making the challenge even greater in this contest was the format that called for five sets to be played regardless of score, leading the Gold Team to a 24-26, 25- 23, 27-29, 25-19, 15-10, victory over the Gold.

Locally, taking part in this event for the Black Team were Lapeer West’s Marnie Fettig and LakeVille’s Autumn Lang and Caitlyn Bradshaw.

Also suiting up for the Black were Davison’s Alexandra Dowdall, Goodrich’s Morgan Eddy and Carman- Ainsworth’s Kamrin Gold, who will be taking the college volleyball court this fall for Troy University, Saginaw Valley State University and the University of Maryland, respectively

Other area talent selected to take the court for the Black in this showcase included Swartz Creek’s Ashlyn Neumann and Grand Blanc’s Lauren Ulrich.

The Gold Team also had several local athletes among its ranks, such as Swartz Creek’s Taylor McGuire, who will play for Mott next season, and Grand Valley State University-bound Kelly Belanger from Goodrich.

Rounding out the Gold roster were a host of players who will spend their freshman season playing for Mott, including Flushing’s Lauren Fenton and Ali Harvey, Frankenmuth’s Lauren Reinbold, Linden’s Kaitlyn Dunleavy and Kearsley’s Ann Marie Roda. Flushing’s Emily Wendling also played for the Gold before heading of to SVSU to join the women’s basketball team for the 2012-13 season while the Black squad’s Jordan Sargent will do the same at Owens Community College after a prep career spent at Linden while Fenton’s Sarah Collier earned herself a spot on the Alma softball team.

Game statistics for this matchup were not kept for either squad, but MVP honors were earned by Gold for the Black team and McGuire for the Gold.