Locals thrilled to have pro golf back in Grand Blanc 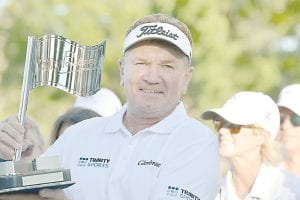 GRAND BLANC TWP. – Fans of professional golf could not contain their excitement last week as the inaugural Ally Challenge presented by McLaren took place at Warwick Hills Golf and Country Club Thursday-Sunday. A record 66,000 tickets were sold for the first-ever event.

Paul Broadhurst of England won the first-ever event trophy after finish at -15 to mark his second win in Michigan this season. A final-round 66 gave him a two-shot victory over Brandt Jobe. This was Broadhurst’s Tour-best third victory of the season and he improved to No. 6 in the Charles Schwab Cup.

Many at the course serving as volunteers last week included 30-plus year volunteers from the Buick Open that last stopped in Grand Blanc Twp. in 2009. The Ally Challenge will return for at least two more years for its initial stint. That has people already circling their calendars for next year.

The PGA TOUR Champions golfers were just as excited to be back. They had no say in the demise of the Buick Open when Buick dropped its sponsorship of one of their favorite tourneys of the year and many at this year’s Ally Challenge echoed the same thought: we never should have left here. 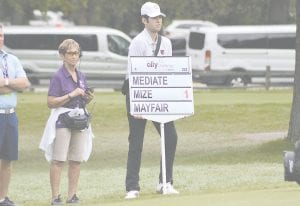 Grand Blanc High varsity golfer Brendan Silpoch, was selected as one of the standard bearers for the Ally Challenge. Photo by Austin VanDaele

At Thursday’s pro-am, fan favorite Fred Couples was overheard saying, “Thrilled to be back. We love it here” when several fans thanked him for coming back as he walked from the first tee box to the fairway signing autographs as he walked.

Colin Montgomerie, Kenny Perry and John Daly were equally happy to be back. Warwick Hills is a favorite course of the now-senior players. Daly unfortunately withdrew after the ninth hole citing neck and shoulder pain, but was heard to exclaim, “No way was I missing this tournament.”

First Tee announcer Jeff Powell, a member of Warwick Hills since 1941, could hardly contain his excitement. “This is the best job ever,” I’m having a blast out here,” he said in between announcing players. 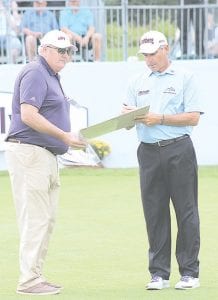 Jeff Powell, a member of Warwick Hills, gets an autograph from Fred Couples. Powell was the first tee announcer during the pro-am portion of the Ally Challenge. Photo by Lisa Paine

Barb Gibson, a marshall on the first tee, is a returning 30-year volunteer from the Buick Open Days. “I’m very happy to have this back (pro golf),” she said. “Grand Blanc needed this.” 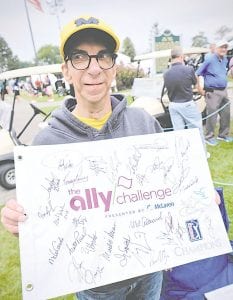 Steve Atwater, of Rochester, was on site at 6:30 a.m. Thursday to set up shop to get all the pro autographs. Photo by Dan Brovont 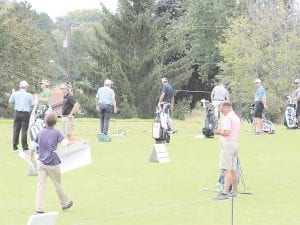 Local golfers practice on the driving range alongside professionals during Thurday’s Pro-Am. Photo by Kylee Richardson 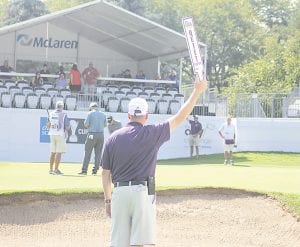 A local volunteer makes sure the crowd is quiet and respectful on the 18th green last Friday. Photo by Joe Oster 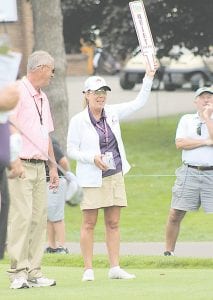