Loggers down but still not out 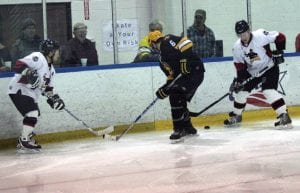 The Lapeer Loggers are still off the ice and under league control.

LAPEER — The current journey into financial purgatory for the All American Hockey League’s Lapeer Loggers first began to burst forth on December 30 when head coach and former Flint General Lorne Knauft announced his resignation from the team because he was afraid they were lacking necessities like health insurance and workers compensation benefits.

Knauft also worried these decisions could create some potential personal liability for himself, making the decision to walk away after not getting paid for the last month that much more financially sound.

What brought all this on was owner George Harrison allegedly ending his affiliation with Lapeer because of the associated debt he was accumulating, including unpaid ice fees to the Polar Palace, player salaries and money owed on the house the team rented for its out-of-town players. While the Loggers did go on to lose, 8-2, at Battle Creek on Dec. 31 with only four team regulars on the ice and league commisioner Rod Davidson coaching, the squad hasn’t played since, cancelling games on Jan. 2 and 8 against the Revolution. On Jan. 3 the AAHL did announce on its website that it had taken control of Lapeer, which brought on a Jan. 9 report from the County Press that an investor was in place but things were in limbo because the old regime was still in possession of items such as equipment, merchandise and trademarks.

This is actually the Loggers’ first season of play, getting approved for AAHL membership in Aug., 2010, making them the third team this season to face financial hardships after the Wooster Korn KIngs and Indiana Blizzard.

George Harrison also came into this situation with time constraints because of his job with the Canadian government, a situation that was exacerbated when son and general manager Tyler moved back to Minnesota, leaving his uncle Chuck Harrison to take over as General Manager.

Neither the Loggers or the League websites have any updated information regarding this situation, but a League announcement regarding tickets already purchased is supposed to be forthcoming. Tyler Harrison did report earlier this season the league salary cap is $3,000 a week, while the roster currently lists more than 30 active players. E-mails sent to info@loggersaahl.com and George and Tyler Harrison’s team addresses were returned with the message ‘address rejected-user unknown’ while Davidson and Knauft were not able to return calls before we went to press Wednesday morning. As for acting Loggers’ General Manager Chuck Harrison, he’s biding his time for now, choosing his words carefully in preparation for what’s to come.

“All I can say today is that what happened should have never happened. There are many to blame, including the Polar Palace, the league as the biggest. I will say more in the next few days,” said Chuck Harrison on Tuesday.

Janet Mann, General Manager of the Polar Palace, says Harrison’s finger pointing is disappointing. When asked, she refused to discuss the financial terms of their agreement and whether or not Harrison’s Loggers were current with the Polar Palace.