Loggers edged out in overtime by Blizzard 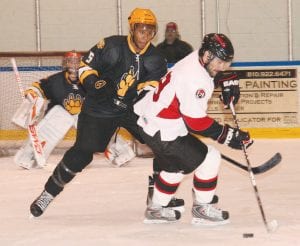 The Loggers’ Gordie Brown in the Bruins’ zone last Friday at the Polar Palace.

INDIANA
— With Sunday’s game against Queen City getting rescheduled for Dec. 18 at 9:30 p.m., even though the game sheet on the league website lists the contests as a forfeit by the Storm, the All American Hockey League’s Lapeer Loggers were at the Midwest Training/Ice Center last Saturday to take on the Blizzard, losing, 4-3, in overtime despite going up 3-1 in the second period.

With the two squads combining to go 0-for-13 on the powerplay and Indiana outshooting Lapeer, 46-33, on the night, including 12-10 in the first and 20-5 in the third, it was Nigel Hawryliw that got the scoring started for the Blizzard at 5:34 of the opening stanza with help from Shane Ferguson and Zach Kane.

That laid the groundwork for a second period dominated by the Loggers, a trend that truly took hold at 4:51 when Albert Mitchell made it a 1-1 game on passes by Tim MIchaels and Christopher Smith. Tyson Theaker then put Lapeer up, 2-1, at the 9:29 mark on the Nick Bet and Gordie Brown assists before Jeremy Tucker blasted home the Loggers’ final goal at 13:32 to take a two-score lead with help from Oliver Hamel and Zack Macvoy.

Slowly but surely the Blizzard battled back, though, making it a 3-2 game at 14:15 of the second period off the stick of Cameron Sault on the Billy Hunt pass. In the third, it wasn’t until 17:03 that Hawryliw lit the lamp for Indiana on the assists by Jim Stussy and Ferguson to make it a tie game, allowing Sault’s net-bender at 2:30 of the extra session to serve as the difference maker. With Darren Mann and Brian Jacque helping out on that final goal for the Blizzard, Dave DeSander got the loss in goal for Lapeer with 42 saves on 46 attempts.

“I thought our team played well. Indiana has a pretty speedy lineup, but we moved the puck well and our forwards did a good job of following through on their checks,” said coach Lorne Knauft. “Unfortunately, in the third period they tied it up and got a lucky bounce in overtime.”

Last Friday was a much different story when the Loggers hosted Troy, as Lapeer went up 2-1 and 4-1 in the second and third periods on their way to a 5-2 victory. In the opening session Lapeer’s Brent Sullivan got the scoring started at 7:22 on the Marc Northington assist, only to see the Bruins even things out less than a minute later on the Todd McIlrath shot with help from Lee McLure. From that point forward the Loggers turned on their afterburners and never looked back, a run that officially began when Nick Bet scored at 5:24 of the second period on the powerplay unassisted. Brad Bohlinger then put Lapeer in the driver’s seats 3-1 at 7:49 on passes by Macvoy and Brown.

“We had to slow these guys up because they’re smaller but faster,” said Sullivan, who is also a team captain. “We took the body a lot better and then we buried our chances.”

In the third McIlrath did pull Troy within a goal at 3-2 after scoring at 4:03 with a man advantage unassisted, but that’s as close as the Bruins would get as the Loggers’ offense went into overdrive with scores at 5:31 from Brown unassisted and at 8:44 by Derek Merlini shorthanded on the set-up by Jeremy Tucker and Macvoy. With Lapeer winning the shot war, 30-29, and the two teams coming together for a mere 11 infractions for 22 minutes of penalty time, DeSander got the victory for the Loggers by going 27-for-29 in his time between the pipes.

“We put in some hard practices after last week and we put together a total team effort,” Loggers’ defenseman Jeff Amadio said.