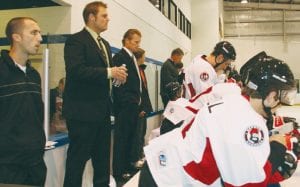 The Lapeer Loggers didn’t last two months when financial troubles with its ownership and the AAHL forced both to cease operations.

LAPEER — When the Wooster Korn Kings of the All American Hockey League suspended operations for 2010- 11, a dark cloud rolled in over the organization’s four remaining teams, a reality that truly took hold when the Indiana Blizzard moved to Chicago after starting 2008 as the Detroit Hitmen. The next pillar to fall from this house of cards was the Troy Bruins, creating a domino effect that sent Lapeer into a financial tailspin from which there was no recovery, thereby leaving Queen City and Battle Creek as the last teams standing in a league that saw the now defunct Evansville Iceman take its final championship trophy last season in just its second year of operation.

All that’s left now is to clean up the final carnage left behind for a fan base that was loyal to a fault since day one, but just like every other chapter of this tale, there are two sides to every aspect, turning a simple process into a Rubix Cube of twists and turns. Because the AAHL website (aahl.pointstreaksites.com/view/ aahl) hasn’t been updated to reflect most of the pitfalls that have arisen during the new year, the next logical step would be to look to the Loggers’ individual team site, unearthing the fact that www.lapeerloggers.com no longer exisits.

From there the quest takes us to Lapeer owner George Harrison, who did finally address fan concerns regarding issues such as tickets purchased for games never played, only to once again leave us wanting more.

“The league took over our operations as per their web site and therefore they are deemed to be responsible for this area. I have included the persons email that I think is in charge,” George Harrsion said.

As such, the Polar Palace was issuing flyers last weekend to unsatisfied customers titled ‘Lapeer Logger Update’ that stated: “Due to circumstances with the AAHL League, the Board of Directors were unable to come to an agreement that would meet the needs of all the teams involved. As of Jan. 6, 2011, there are no scheduled games at the Polar Palace Ice Arena. All questions should be directed to the parties below: Rod Davison – Commisioner, rdavison@aahlhockey.com, 608-216- 1045; Bobby Clouston – President, bclouston@aahlhockey.com, 248-470- 0441.”

Also mentioned on this five-person contact list was merchandising director Adam Harrison, acting general manager Chuck Harrison and George Harrison in his role as President of the Golden Horseshoe Hockey League, which according to www.ghhlhockey.com, “operates competitive men’s hockey leagues in the City of Burlington (Ontario) arenas such as Appleby Twin Pads, Mainway Arenas, Central, Nelson and to a limited number, Skyway Arena. These arenas are well maintained by the Parks and Recreation Department. The GHHL is a proud member of the Burlington Ice Council and supports the ice allocation in the city to satisfy all groups.”

In keeping with the family theme, Ryan Harrison is listed as the GHHL director of officials.

The final twist to this tale is that despite everything that’s occurred all may not be lost, as their is talk of relaunching next season while the Battle Creek Revolution website and the AAHL website both have game results and stats for the teams Jan. 14 matchup against the Chi-Town Shooters. There was also discussion of a Flint area team arising from the ashes of these fallen franchises and playing out the remainder of the current season someplace like Ice Mountain in Burton, but that plan simply didn’t prove viable.