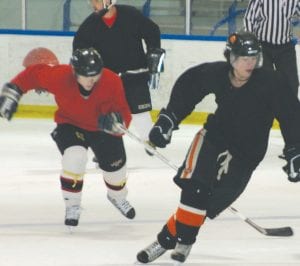 LAPEER
— From Oct. 8-10 the Polar Palace Arena Complex, 3301 Davison Rd., gave the area a taste of its very own brand of professional hockey in the form of the first annual Lapeer Loggers’ training camp, a three-day extravaganza spread out over several different time periods to allow the public maximum access to the speed and strength that comes with the action of the All American Hockey League.

“Day one went really well. We were very impressed with the talent on the ice,” said Loggers’ General Manager Tyler Harrison. “The fans have been very excited for the start of the Loggers’ season.”

With play commencing for an exhibition contest tomorrow against Battle Creek, followed Oct. 22 by the Loggers’ initial home game of the 2010-11 regular season, time is absolutely of the essence for Lapeer, as the team’s roster won’t be official until they’ve had a couple more days to evaluate the talent they currently have on hand.

“The Loggers’ roster will not be set after this camp. The players at this camp (learned) Sunday after the morning skate if they (had) been signed with the team or invited to training camp the following weekend,” Harrison said. “Players will come to the training camp (this) weekend where the final cuts will be made and the Loggers will have their official roster.”

That frenetic pace is one Lapeer is growing accustomed to at this point, which started after the team was granted membership in the AAHL in August and was followed Sept. 14 by a development agreement with the South Muskoka Shield of the Greater Metro Junior A Hockey League. Things were even hectic coming into this event for the team, as on Oct. 5 it was announced the squad would be joining forces with the Flint Generals’ Booster Club to create what is being called the Booster Club of the Lapeer Loggers, which came a day before the organization signed forwards Brent Sullivan and Albert Mitchell. While it is club policy not to discuss contract details, the AAHL has a $3,000 per week salary cap and each team is allowed a maximum of 20 players.

“We are excited to see what Albert can do at the pro level, we hope he will open with a scoring punch to help us through the season,” said coach Lorne Knauft. “We are really excited to have Brent join our club, his experience will help a lot of the younger guys in the locker room.”

Lapeer has even launched a promotion called “Ride the Bus with the Loggers” in conjunction with Bubba O’Malley’s in Burton and the Rain Check Lounge in Flint, which gives fans a ride to and from the arena, game tickets and two beverages for $14.50. The team hopes to announce locations in Grand Blanc and Port Huron fairly soon, as well.

“We want to reach out to our fans from the Flint area and get them involved with the Loggers at a cheap price,” Harrison said.

“The team is doing very well. We will be making a big announcement on a promotion in the next few days,” said Harrison. “We will also be having a community day Oct. 16 at the Polar Palace from 10 a.m.-2 p.m. where kids will be treated to hot dogs and will get to play street hockey with the Loggers.”