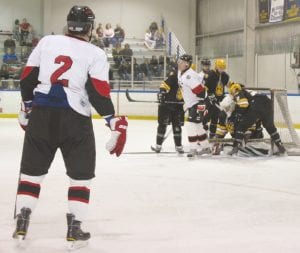 Defenseman Brady Sluman looks on as the Loggers battle with Troy for possession of the puck at the mouth of the net.

LAPEER
— Having won five of their first nine contests, including victories of 3-2 over Indiana and Battle Creek on Nov. 13 and 14, the All American Hockey League’s Lapeer Loggers came into last Friday’s matchup at the Polar Palace, 3301 Davison Rd., against Troy looking to slow down a Bruins’ offense that had just dropped Wooster 6-3. The 650 Loggers fans in attendance didn’t quite get the show they were hoping for, though, as Troy jumped out to leads of 4-0 and 6-1 at the end of the first and second period on its way to an 8-2 victory.

In the opening session it was Michael Jordan who scored the game’s initial goal for Troy at 1:23 on the Josh Swenson assist, a lead that grew to 2-0 at 3:15 off the stick of the Bill Knauber. The Bruins then extended their advantage to 4-0 at 9:06 and 18:09 with scores from Jordan and Willie Boyle with help from Kevin Lee and Jim Rettig. The second period was more of the same as Troy went up, 6-0, as Swenson bent the net at 9:35 and 13:59 on passes from Dan Morini, Scanlon and McClure. That’s when forward Brent Sullivan finally put Lapeer on the board at 18:39 with help from Christopher Smith to make it a 6-1 game, but that’s as close as it’d get. 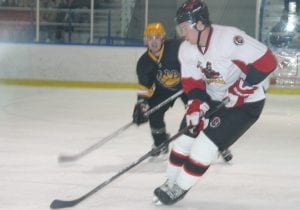 Lapeer went to work on a first period powerplay opportunity against the Bruins Friday night at the Polar Palace.

In the third, Swenson scored twice more for Troy at 5:55 and 9:08 on the Jordan assist to give his team an 8-1 advantage, a mark Zack Macvoy made one final alteration to for the Loggers at 18:55 on passes from Derek Osbourne and Brian Townsend. With the two teams combining for 22 infractions for 76 penalty minutes, goaltender Dave DeSander got the loss for Lapeer by only stopping 24 of the 32 shots he faced, while Troy netminder Rob Mattison went 30-for-32 in the same category.

Having also lost to Indiana, 4-3, on Nov. 12 and Battle Creek, 5-2, on Nov. 6 after besting the Blizzard, 9-4, on Nov. 5, the Loggers are currently third in the six-team league with 10 points, placing them behind Battle Creek and Troy with 14 points each, but ahead of Indiana, Queen City and Wooster with seven, six and four, respectively. As of today Macvoy was also third in the AAHL’s points race for Lapeer with eight goals and seven assists in six games played for 15 points, while Howarth was tied with three other players in 14th place with nine goals and an assist for 10 points, including the Loggers’ Albert Mitchell with two goals and eight assists.

Lapeer hosts Wooster tomorrow night at 7:30 p.m. prior to playing at Indiana Saturday at 7:05 p.m. and Queen City Sunday at 1 p.m.