Loggers ready for the cup 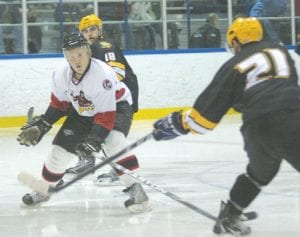 Visa trouble put a lot of first-time players on the ice last Friday against the Troy Bruins. Here, a player tried to stop the scoring barrage put on by Troy.

LAPEER
— With the National Hockey League’s Stanley Cup set to hit the Polar Palace, 3301 Davison, tomorrow for the team’s matchup against Queen City at 7:30 p.m., the Loggers cooled their jets with an All American Hockey League contest in front of 541 Lapeer faithful Friday night, losing to Troy, 9-6.

“A lot of guys have never even seen the cup, so it should be exciting,” said Loggers’ coach Lorne Knauft.

Having been outshot 40-36 for the contest, including 16-10 in the first period and 16-15 in the third, the difference for Lapeer came when Troy took a 3-0 lead at the end of the opening session when Kevin Lee, Dan Morini and Lee McClure scored for the Bruins at 2:56, 6:46 and 12:43, respectively, on assists by James Rettig, Willie Boyle, Ryan Stern, Aaron Blades and Sean Menton.

“We showed a lot of spirit. Unfortunately, we got off to a slow start and that cost us the game,” Knauft said.

Troy started the second period with more of the same, extending their advantage to 5-0 at 1:38 and 2:52 off the sticks of Lee and Stern with help from Boyle, Chris Tasic (2) and Josh Swenson. That sent Lapeer into a fury starting at 10:32 when Matthew Wiljanen hit nothing but net on passes from Brent Dexter and Albert Mitchell. The Loggers then blistered Bruins’ goalie Rob Mattinson on the powerplay at 14:05, as Nick Bet made it a 5-2 game with help from Mitchell and Jeremy Tucker, which Lapeer followed at 16:48 with a net bender from Brandon Scero on assists by Wiljanen and Brent Dexter to pull within two at 5-3.

Troy refused to wither in the face of adversity, though, taking a 6-3 lead at 17:18 of the second when Willie Boyle connected on passes from Tasic and Lee. This ever-building tension ended in a third period crescendo featuring a fight between Lapeer’s Terry Watt and Troy’s Mike O’Brien, a battle preceded by seven total penalties during the game’s closing stanza. The ill-will actually began when the Bruins went up 7-3 at 4:04 of the third when Josh Swenton made good on a Sean Menton setup, to which Lapeer replied with a Teemu Okasa goal more than 10 minutes later with a man advantage on assists from Mitchell and Tucker.

The Loggers were then able to scrape back and pull within 8-6 after Brad Townsend capitalized on powerplay opportunities at 17:36 and 18:01 with help from Bet Tucker, Oksa and Bet again. But, that’s as close as Lapeer would get after Blade knocked one home for Troy at 16:19 with a man advantage on passes from Ryan Stern and Derek Scanlon, before O’Brien blasted home an empty netter with help from Swenson and Scanlon at 19:48. Defensively, Loggers’ goalie Dave DeSander made 31 saves on 39 attempts to get the decision.

“I’d like people to come out who aren’t impressed with the skill level and see what we have to offer because we’ve been playing an impressive brand of hockey from the start,” said Knauft.

Lapeer had been slated to play at the Blizzard Sunday, but according to Knauft, “Indiana has since folded,” making them the second AAHL team to take this same plunge. The first was the Wooster Corn Kings last month. The Loggers are at Queen City Saturday at 1 p.m. and Battle Creek New Year’s Eve at 7 p.m.