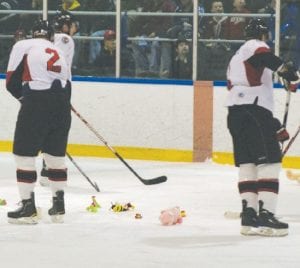 LAPEER
— When all the pomp and circumstance of royalty meets the eclectic-yet-electric wave of anticipation that follows international superstars like the Beatles to New York City, what you’ve got is the glitz and glamour of the National Hockey League’s Stanley Cup.

“We did a quick sponsor thing then came here (to the Polar Palace). We’ve been at the rink since 5 p.m., but we’ve been in town since the early afternoon,” said Mike Bolt of the Hockey Hall of Fame, who holds the title, ‘Keeper of the Cup’. “The cup is an international rock star. Everywhere we go it attracts a crowd. It doesn’t matter if you’re in a small town in Michigan or in a large city like Chicago or Detroit, it attracts a crowd everywhere we go. Even internationally, when we go overseas to places like Russia, Sweden and Finland it’s a big deal. This is a great turnout. It helps promote the team that’s here and people will get to see some good hockey tonight, hopefully, and get to see the greatest trophy in all of sports.”

In turn, the people of Lapeer and its surrounding counties came out en mass to revel in the Stanley Cup’s glory, sending a chill of excitement up the spine of hockey fans young and old alike that ended with the Loggers blowing Queen City out of the water, 8-4.

“It doesn’t matter if you’re a Red Wings fan, a Blackhawks fan or a Penguins fan, this is it. This is the one these guys play for. The one they skate around with on the ice, and the fact that (the fans) can come up, put their arms around it and give it a kiss and maybe even find their favorite team on it or favorite player, that’s the beautiful thing with the Stanley Cup,” Bolt said. “It’s the same trophy year after year. It’s not brand new like the Lombardi or the World Series, and that’s what makes it such an attraction, because of the history and the people that have touched it. Like the Nicklas Lidstrom’s and Steve Yzerman’s of the world. It’s got Sydney Crosby, Bobby Orr, Wayne Gretzky, Mario Lemieux, Guy LaFleur and a thousand other names that are on there and have all won it that we all watched growing up.”

All that left was the game itself, and even that didn’t kick off as planned when a player pay issue kept the game from starting as scheduled, allowing fans to spend another 10-15 minutes with the cup because the picture-taking time was extended throughout the night despite original plans to the contrary. The game did finally start with the Loggers’ Matt Bendall in the box for a two-minute delay of game penalt, setting the scene for Lapeer’s Teemu Oksa to follow up a killer check deep in Queen City territory with the evening’s first goal at 6:46 of the opening period with help from Marc Norrington and Derek Merlini.

After the crowd tossed 30-40 teddy bears over the protective nets and down to an icy grave in a show of charity and support, Joe Rackett struck back for the Storm just 22 seconds later, but the Loggers’ Zack Macvoy made it a 2-1 game at 11:40 on the pass by Jeremy Tucker. In the second, Macvoy both opened and closed the scoring at :14 and 16:18 for Lapeer to clock himself a hat trick, a feat sandwiched around Loggers’ goals by Norrington and Smith at 2:16 and 4:44 to end the session up, 6-4. Albert Mitchell and Smith then pocketed a little security for Lapeer at 9:46 and 12:50 of the third, giving goalie Matt Wagner the victory with 34 saves on 38 attempts.

Last Saturday, the Loggers were at Queen City for the rematch, winning, 4- 3, on goals from Tyson Theaker (3) and Jeff Amadio. Lapeer is at Battle Creek on Dec. 31 and on Jan. 2 the Loggers host the Revolution in the second matchup of this two-game-series.