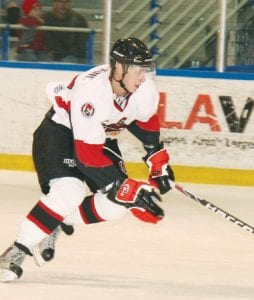 Derek Osborne (27) of the Lapeer Loggers.

BATTLE CREEK
— With two games scheduled in two different cities in just as many days, the All American Hockey League’s Lapeer Loggers had their work cut out for them last weekend, including a 5-2 loss at the Revolution last Saturday.

With Battle Creek taking leads of 1-0 and 3-1 in the first and second periods, opening the evening’s offense for the Revolution at 11:36 of the initial session was Ryan Dolgy, a feat Lapeer’s Ryan Howarth copied at the 12:54 mark with help from Zack Macvoy and Teemu Oksa to tie things up at 1-1.

That set the stage for a second period dominated by Battle Creek, as Dolgy and Justin Barr hit nothing but net for the Revolution at 3:03 and 11:50, respectively, on the assists by Ryan Bond, Rob Schweyer, Dolgy and Darren Seid. In the third it was more of the same, as Billy Sears and Brett Aimone connected at 5:50 and 14:39 for Battle Creek on passes by Aimone and Schweyer to go up 5- 1, making Matt Bendall’s goal for Lapeer at 17:21 with help from Mason Cossette and Christopher Smith too little, too late. With six penalties for 29 minutes in the box as a team, the Loggers’ defensive efforts were led by goalie Matt Wagner with 19 saves on 24 attempts. Lapeer was also outshot, 24-21, for the game, including 12-5 in the ever-important second period.

Last Friday, the Loggers hosted the Indiana Blizzard at the Polar Palace, winning, 9-5, as Wagner swatted aside 48 of the 53 shots he faced to pocket the decision. In the first period MacVoy lit the lamp unassisted for the Loggers at 5:26 to take a 1-0 lead, an advantage that only lasted until 14:11 when Nigel Hawryliw connected for Indiana. In the second period it only took 17 seconds for Macvoy to score again for Lapeer on the Oksa pass, which Oksa followed with a goal of his own 39 seconds later on the assists by Macvoy and Oliver Hamel to make it a 3-1 game.

What came next was a back-andforth attack that started with Indiana’s Yuri Nogaev knocking one home at 4:43, only to find the Loggers’ Jeff Amadio returning the favor at 13:57 with help from Brent Sullivan before Hawryliw went back to the Promised Land for the Blizzard at 15:45 to pull his team within a goal at 4-3. In the third, Lapeer simply proved to be too much for Indiana, a trend that started just 17 seconds in when Howarth scored on the Macvoy and Oska assists prior to Macvoy’s laser shot to glory at 3:01 on the Jeremy Tucker pass that put the Loggers up, 6-3. Brad Townsend was Lapeer’s next offensive contributor at 5:28 with help from Jeffrey Kuncaitis, which made it an 8-3 game after Howarth put one home for the Loggers at 6:04 on the assists by Derek Osborne and Macvoy.

While Indiana did manage to score twice more off the sticks of Cameron Sault and John Sarno at 14:50 and 17:20 of the third stanza, those accomplishments were sandwiched around Macvoy’s final offensive effort of the night for the Loggers at 17:01 on passes from Oksa and Nick Bet. With 27 penalty minutes on nine overall infractions for Lapeer, Blizzard goalie Jay Linder could only make 39 saves against 48 attempts, which the 950 fans in attendance were more than pleased to see. After five games played the Loggers are 3-2, placing them second behind Battle Creek in the six-team standings. Lapeer hosts Indiana tomorrow before playing at the Blizzard Saturday and Nov. 19 Troy comes to town. Details: 810-245- 7778 or www.polarpalace.com.