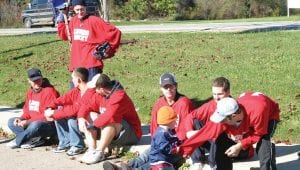 “We had a great crowd for our first night out. I think the attendance was (686) and we showed them a great game,” said General Manager Tyler Harrison. “I’d say the Mitchell brothers were the standouts. They scored our first two goals and Teemu Oska connected on the last one.”

The Loggers then celebrated their initial triumph with a “Community Day” promotion last Saturday from 10 a.m.-2 p.m. where kids were treated to hot dogs, donuts and pop along with a chance to test their hockey skills against at least a dozen Lapeer squad members in the parking lot of the Polar Palace, 3301 Davison Rd.

“We’ll have more events like this in the future, but they’re still in the planning stages, so we don’t have an exact date yet. We’ll be working with Local Minor Hockey,” Harrison said. “I think we offer great entertainment. It’s good hockey, hard-hitting hockey, yet still a family friendly show that everybody will like. You had everything last night. Goals, fights, hard hits, just what every hockey fans loves, and I think that’s what we offer.”

Prior to last weekend’s two-day extravaganza the Loggers set all this in motion with the Oct. 11 announcement that 10 players had been signed from the team’s initial training camp on Oct. 8-10, including forwards Steve Filak, Tyson Theaker, Matt Bendall, Tim Michaels, and Oliver Hamel, defensemen Jeff Amadio, Derek Osborne and Chris Sanou and goaltenders Matt Wagner and Dave DeSander.

“It was my first pro game, so it was a little nerve-racking going in, but once you drop the puck and get your first body check going, it was fun. I think our team looks pretty good,” said the 26-year-old Bendall, who spent the past couple years in an 18 and over men’s league after playing junior hockey out East for several seasons and suiting up collegiately for SUNY Morrisville in New York. “We’ve got a lot of young guys, a lot of rookies, but not a lot of veterans, so it will be interesting to see how it’s going to turn out for us, but I think we’ll be successful and make a run for a title.”

All this resulted in Sunday’s announcement that three more players had been signed by Lapeer, including Mason Cossette, Jan Prusa and Oksa. Last season, Cossette, who’s 23 and hails from Austin, Tx., was with the International Hockey League’s Flint Generals for a short time, but spent most of the year with the Revolution, posting six goals, six assists and 202 penalty minutes. Prusa, on the other hand, split 2009- 10 between the Generals and the Chi-Town Shooters of the AAHL after two tours of duty in the Quebecbased LNAH. As for Oksa, the Jyväskylä, Finland, native took the ice in both the Div. I Junior Finnish League and Div. 2I Pro Finnish League last season.

“This is my third year in the league and the fan base here is unreal. I’m really looking forward to the season and Friday night is going to be nuts,” said Cossette. “We had a slow start. That first period was kind of sloppy, but we definitely finished strong. I don’t think anybody really knows what the other teams are going to look like, but I think we’ve got the best background and one of the best organizations. I think we’re going to be one of the strongest teams in the league, for sure.”

One promotion currently in play is the Loggers’ search for a Superfan, who must be a season ticket holder planning to attend 90 percent of the the home games and will get to ring in every Lapeer goal.

“It was a good game. We started out a bit slow, but we picked it up. A couple of good fights got our team in it and the crowd going, so it was nice,” said 22-year-old defenseman Brady Sluman of Barrie, Ontario. “Everything’s good so far. We’re all living together and coming together as a team real quick, so I think we have a tight-knit group here and we’re going to do well. I see us as a force to be reckoned with in the league this year. We’ve got nine or 10 guys in the house right now and we’re all getting along great and having a blast. Lapeer is great. It’s a small town and I grew up in small towns, so I love it.”