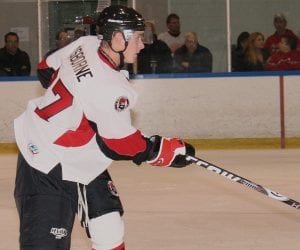 Derek Osborne fired a puck down the ice to a teammate in a recent Loggers’ game.

BATTLE CREEK
— With no Sunday night game to worry about, the All American Hockey League’s Lapeer Loggers went into their two-contest stint last Friday and Saturday with reckless abandon, winning both matchups in two very different fashions.

Last Saturday, Lapeer made the trek to Battle Creek to take on the Revolution, taking a 5-2 victory after going 1-for-6 on the powerplay and taking leads of 2-0 and 3-0 during the first and second periods. Derek Osborne got the scoring started for the Loggers with a man advantage at 11:00 of the first with help from Albert Mitchell and Zach Macvoy, a lead Lapeer then doubled just over two minutes later off the stick of Nick Bet on passes from Macvoy and Gordie Brown.

In the second, Brown made it a 3-0 game for Lapeer unassisted at 8:59, spurring Battle Creek to finally get on the board at 17:56 thanks to the efforts of Shawn McNulty. That set the stage for a third period that was all Macvoy, scoring for the Loggers at 9:57 and 19:44 on assists from Mitchell and Brown and Bet, and Derek Merlini, respectively. Amidst the action, the Revolution’s Darren Seid did light the lamp once more at 11:30, but that’s as close as Battle Creek would get after getting out-shot by Lapeer, 38-36. The final stanza was also wrought with less than affable attitudes, leading to 13 fighting penalties being called at the 20:00 minute mark, five of which were major infractions courtesy of the Loggers’ Matt Bendall, Bet, Mason Cossette, Osborne and Matt Wagner.

Defensively the story for Lapeer was Matt Wagner with 34 saves in net.

Last Friday, the Loggers hosted Queen City for a much closer contest, winning, 4-3, as the two teams combined to put up a mere nine penalties for 32 minutes in the box. With both squads also going 0-for-2 on the power play, the Storm’s Jed Johnson opened the evening’s offensive efforts at 9:26 of the first to give Queen City a 1-0 lead. That led to an exchange of goals that put the Storm up 2-1 at the end of the period, with Mitchell knocking one home for Lapeer at 12:41 with help from Merlini and Macvoy at 12:41, while Jose vasquez hit nothing but net at the 17:25 mark for Queen City.

In the second the Storm extended their advantage to 3-1 when Jon Espisito hit paydirt at 8:40, marking the start of a Loggers’ comeback that Jeremy Tucker turned from hope to reality by scoring at 10:02 on the passes from Macvoy and Tim Michaels. Lapeer then tied the contest at 3-3 when Tucker once again bent the net at 5:27 of the third on the pass from Macvoy. That allowed Tyson Theaker to bury the game-winner for the Loggers at 8:35 on the assists by Marc Norrington and Teemu Oksa. Between the pipes Lapeer got another solid effort from Wagner, making 30-of-33 save attempts to earn the decision.

“In college, that was the most important part of my game because I wasn’t a big scorer. I like being on the kill when the game is on the line.,” said Mitchell. “Coach wants me to provide some speed now, put pressure on by getting the puck deep and getting dragged down so we can have the man advantage. Plus I’m kind of an agitator out there.”