Loggers win two in a row 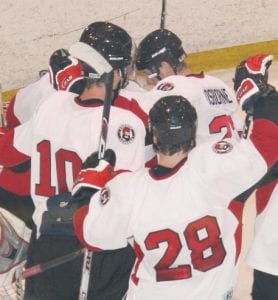 LAPEER
— Despite getting outshot 28-19, the All American Hockey League’s Lapeer Loggers gave the Battle Creek Revolution all it could handle and just a little bit more Sunday at the Polar Palace, winning 3-2. After the first period came and went without either team sporting even a single shot on goal, Battle Creek’s Marco Trevino opened the game’s offensive efforts just 22 seconds into the middle session, which gave the Revolution its only lead of the game. It wasn’t long before Zack Macvoy used the pass from Nick Bet at 2:09 to even things up for Lapeer, an ante Albert Mitchell met and raised with help from Macvoy 32 seconds later to put the Logger’s up 2-1.

Macvoy then clocked Lapeer’s final goal at 5:31 of the second on the assists by Mitchell and Derek Osbourne to make it a 3-1 game, a margin Battle Creek’s Justin Barr besmirched at the 17:26 mark. With the third period also devoid of any offensive offerings, this was definitely a night of flying fists, as the Loggers had 15 penalties for 62 minutes in the box compared to the Revolution with 15 infractions for 54 penalty minutes. Defensively, Lapeer was led by goaltender Matt Wagner with 26 saves on 28 attempts.

One night earlier the Loggers were at Indiana for a much different contest that featured a mere three penalties for each squad, winning 3-2 in overtime. In the opening period Nigel Hawryliw broke the ice for the Blizzard at 18:22, an advantage that held until 6:45 of the second when Shane Ferguson gave Indiana a 2-0 lead. From that point forward it was all Loggers, starting at 8:26 of the third when Jeff Amadio lit the lamp on the powerplay with help from Mitchell and Lorne Knauft. Mitchell then tied the game at 10:56 on the Matt Bendall pass, setting the scene for Amadio to blast home the game-winner for Lapeer at 3:53 of overtime on the Knauft assist. Having outshot Indiana 45-33 on the night, Wagner was once again key for the Logger’s, casting aside 31 of the 33 shots sent his way.

“I’ve played in one road game this season. Realistically it’s been almost 10 years since I took the ice. I came back in 2008 and played six games with the Flint Generals, but before that the last time I played in a professional contest was 2000,” said Knauft, who also serves as the team’s head coach. “I found it fast. To jump back in was tough. One thing I dislike is playing a man down and we didn’t have a full lineup, so this way we didn’t have to play a man short. It’s very possible I’ll have to suit up again and I’m ready because I’ll have to.”

Last Friday, Lapeer hosted Indiana in the first game of this home and away series, falling 4-3 after going 0-for-7 on the powerplay. Having dominated the initial two periods, the Loggers jumped out to a 1-0 lead at 4:49 of the first off the stick of Ryan Howarth with help from Derek Merlini. At 9:35 of the second Lapeer then doubled its advantage when Tyson Theaker made good on the Merlini pass, a difference that grew to 3- 0 when Gordie Brown scored for the Loggers on the assists from Theaker and Brad Townsend at 9:48.

What all this brought about was a final period filled with slashing, roughing and tripping penalties on both sides as John Sarno and Peter Pritchett hit nothing but net for Indiana with a man advantage at 3:53 and 8:21 to pull the Blizzard within a goal at 3-2. It wasn’t until 14:26 that Yuri Nogaev locked things up for Indiana at 3-3, a landmark that Billy Vitale surpassed just over a minute later to give the visitors the win. In net Dave DeSander gave a quality showing despite the outcome for Lapeer, going 16-for 20 on save attempts. The Loggers next host Troy Friday and Wooster on Nov. 26. Details: 810-245-7778.