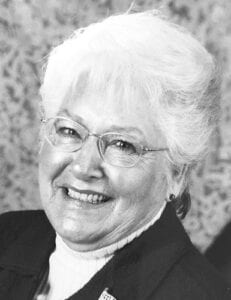 LOLA JOANNE SELL, 85, of Indian River, passed away peacefully at home, surrounded by family on Thursday, February 4, 2021, in Champlin, MN.

Lola was born in a tiny cabin on a river where her Grandmother lived in Germfask, MI. She was the third of four sisters and they lived in Germfask until high school when the family moved to Sault Saint Marie. Lola graduated from Loretto High School and attended two years of college before moving to Minnesota with her sister Mary. Lola moved back to Michigan after one year to marry her true love Harold Sell. They moved to Flushing where they raised their four children. Lola was a devoted wife, sister, mother and grandmother and she made so many dear friends along the way. Lola truly prioritized her Catholic faith, family and friends throughout her entire life. Lola loved staying active with sports like tennis and running. She also enjoyed playing drums for ‘The Love Notes’ with Harold, sewing, knitting, and writing poetry, but her children and grandchildren were her pride and joy. When Harold retired, they built their dream log home in Indian River where they enjoyed life together for 12 years until Harold passed away. We are at peace knowing they were reunited again when Jesus called her home.

A memorial mass will be held this summer in Michigan