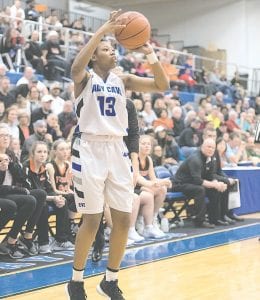 Carman-Ainsworth’s Destiny Strother returns for her senior season and has already signed with Marquette to play at the collegiate level. Photo by Todd Boone

FLINT TWP. — A rugged schedule has been planned for the Carman- Ainsworth girls’ basketball team this year. That’s by design of fifth-year coach Lance Belil, who saw his team make it to the regional finals and a 22-3 overall record last year.

In the rugged schedule is yet another iteration of a Saginaw Valley League makeup, which last year was one big league that Saginaw Heritage earned the title in. This year, says Belil, is a north and south division. He hopes his squad walks away with that south title.

“I’m really excited for this season,” said Belil. “The girls have been focusing in the offseason to get better every day. We aren’t focused on rankings at all.”

Grand Blanc joins the Valley this season, renewing an age-old rivalry for the Cavs. Belil also notes that if everything works out right this season, he could see his team clinch the league title on home court. Carman-Ainsworth will host that championship in February.

“I loaded our schedule and we will be traveling a lot this year,” added Belil. “That’s to play tough teams to prepare us for the end of the season heading into the postseason.”