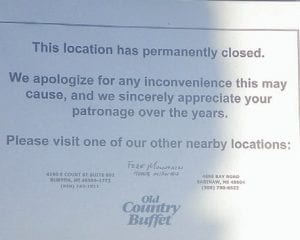 FLINT TWP. — The view through the glass double doors of the Old Country Buffet restaurant, 3583 Miller Rd., is dark and vacant after many years of bustling with patrons fond of all-youcan eat dining. One of several signs taped outside the doors last week was a notice that the Feb. 9 meeting of the Flint Barbie Club had moved to the Fire Mountain restaurant at 4200 Miller Road.

It’s probably a familiar refrain for many clubs and groups that regularly held private meetings and celebrations in the restaurant’s community room. Among them is The West Flint Business Association which also held its monthly meeting this week at Fire Mountain after more than a decade of using the OCB community room. WFBA is made up of nearly 100 members of the business, professional and civic community, primarily in Flint Township, who meet to discuss local issues and raise money for annual scholarships.

The OCB restaurant on Miller Road, which has been around for at least 17 years, was among 81 underperforming locations closed in mid-January by Minnesota-based Buffets Inc. For the second time in four years, Buffets Inc., billed as the nation’s largest steak/buffet restaurant company, has filed for Chapter 11 bankruptcy protection.

The good news is that the OCB at Courtland Center in Burton and Fire Mountain on Miller Road both survived the cut so far and remain open. Another sign posted on the closed OCB doors directs patrons to those locations. Buffets Inc. also operates the Fire Mountain Ryan’s franchises.

Flint-area operations were not affected in 2008 when the company closed 51 of its 626 restaurants and laid off 2,300 employees after filing for Chapter 11.

Prior to the current bankruptcy filing, the company operated 494 restaurants in 38 states, employing about 28,000 people and serving about 140 million customers a year.

“The decision to close these underperforming restaurants, though difficult, resulted from a comprehensive, storeby store analysis of financial performance, occupancy costs, market conditions and the long-term strategy of our reorganized restaurant portfolio,” said Mike Andrews, CEO, in a press released. “In addition to the immediate restaurant closings, the Company is seeking more favorable lease arrangements with its landlords at other restaurant locations. To the extent those leases cannot be modified on acceptable terms, additional restaurant closings may be required.”