Longtime C-A board member moving on 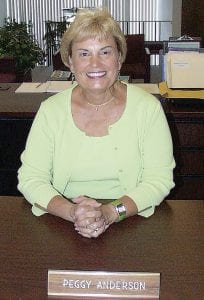 Peggy Anderson is retiring from the C-A Board of Education after 22 years.

FLINT TWP. — After 22 years of service on the Carman- Ainsworth School Board, Peggy Anderson has decided to step down.

She is currently serving a n 18-month extension of her last elected term, which ended June 30, 2013. The extension resulted from a change in Michigan Election Law in 2012 that switched school elections from every May to the November of even-numbered years.

“This being my 22nd year on the C-A Board, I have decided to step down,” Anderson said in a written statement. “Many things have changed during those years but C-A continues to be a great district with wonderful teachers and administrators.”

Anderson said that one of the biggest changes she’s seen during her tenure is in state funding.

“Even with all the cuts we have maintained a full academic program, great teams and a full fine arts schedule,’’ she said.

Anderson has held every position on the board including president, secretary and treasurer, some of them more than once.

“My time on the Board has been very fulfilling,” she said. “I have attended many MASB (Michigan Association of School Boards) classes and learned so much. I have made many friends.”

She also praised the “talented and dedicated’” Superintendent Steve Tunnicliff, who is the fifth superintendent she has served with.

“During all my years with the board, we have worked together and been able to do our best for the students and staff,’’ Anderson said.

She said she hoped to continue being helpful to the district, possibly continuing to work with the C-A Education Foundation to raise funds and implement innovative learning opportunities.

Tunnicliff, in turn, praised Anderson as “a tremendous leader …; a staunch advocate for students, strong academic programs, and public education; and … a consummate professional educator, dating back to her days as a teacher in the Flint Community Schools. Peggy’s passion for the Carman-Ainsworth Community Schools has been contagious and will be surely missed.”