FLINT — Only a few select men have run the Crim Festival of Races every year since it began in 1977.

Flint native Tim Giles was one of them.

Giles, who ran 43rd consecutive Crim 10-mile races, died this past November at the age of 74. He completed his final Crim run last August, just a few months before passing away peacefully at his Flint residence.

During his last Crim event, Giles was one of 17 remaining participants who had completed every Crim 10-mile race since the event’s inception.

To honor Giles’ memory, organizers with the 18th Annual George’s Santa Hat Run in downtown Flint created a special course within the race entitled “2 Crim Miles 4 Tim Giles,” which was held on Christmas Eve. The course was dedicated to Giles’ very first Crim mile in 1977, along with his 430th and final Crim mile that he completed last August.

Riley McLincha, a main organizer of the special course, said that Giles displayed a special passion for the Crim—even going so far as to transform his own garage into a “museum” of Crim memorabilia. 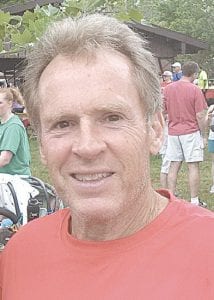 Tim Giles, above and at top (center) running the Crim Photos provided

“Over 240,000 participants have crossed the Crim 10-Mile finish line since 1977, (but) nobody in those numbers loved the Crim more than Tim Giles,” he said.

McLincha, who has also participated in every Crim 10-mile race, said that Giles had a huge impact on the local racing community and was always there to uplift other runners.

“Tim was one to offer encouragement to others more often than most,” he said. “Often enough that some people were about to abandon their endeavor, but his words kept them going and they became very successful.”

In addition to competing in the Crim, Giles was also proud to volunteer with the Crim organization and serve as a group leader for the Crim training program.

But Giles’ love for running wasn’t just limited to the Crim. He competed regularly in other races across the state, such as the Volkslaufe, Tuuri/ Atwood and Mackinac 8-Mile events. He was also an avid mountain biker and raced in several Iceman Cometh Challenges events in Kalkaska, MI.

Giles’ volunteer work also extended to several different sporting avenues. He volunteered for 25 years as a Ski Patroller at Mt. Holly in Holly, MI, and was also an active supporter of the Special Olympics for over 40 years.

Outside the athletic realm, Giles was also well-known for his musical talent. Upon retiring from the GM Die & Engineering Center in Flint after 44 years, he took up the saxophone and joined the New Horizon Band.

Above all, Giles will be wellremembered for his dedication to family and friends, including the loving support he gave to his children and grandchildren.

Condolences for Tim Giles may be shared with his family at swartzfuneralhomeinc.com.