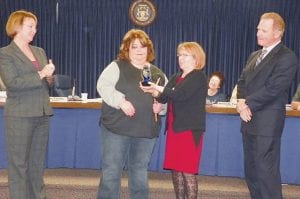 She received a send-off with a cake, a gift and a proclamation Monday night from the Township Board of Trustees, joined by Genesee County Prosecutor David Leyton, who worked with Goyette nine of his 12 years on the board as a trustee and later clerk.

Leyton cited a long list of projects on which he worked side-by-side with Goyette including a cemetery database, neighborhood dispute resolutions, building demolition, a new police station, construction of the post office, creation of the first township website, purchase of new voting equipment, renewal of the cable TV franchise agreement, zoning and board of appeals issues, business licensing and the closing of the Mandeville well.

Leyton also credited Goyette for creating the information board outside the township hall. It replaced a small box that looked like an old bird feeder, Leyton said, eliciting laughter.

Now, “if you want to know at 3 o’clock in the morning what is coming up on the agenda, you can drive up and it’s out there for you to look at,’’ said Leyton, who also called Goyette “the unquestioned expert on running an election. “

“Flint Township elections were always run precisely, efficiently and perfectly and that is because of your dedication to being the township deputy clerk for so many years,’’ he said to Goyette.

In the board’s proclamation, read by township supervisor Karyn Miller, Goyette was praised for her excellent work ethic, high respect for fellow employees and the residents and outstanding commitment to public service.

She started work as a clerical employee in October 1986 and was sworn in as deputy clerk about one month later. Honors she has received included the Loretta Manwaring Award in December 2003, the Township Board Commendation for Outstanding Service in June 1987, and recognition from Secretary of State, Candice Miller for assistance with the qualified Voter File Program in October 1999.

Goyette, 58, said she is far from retired. Declining to be specific, she said she has political aspirations and will be running for elected office this year. She ran unsuccessfully for a seat on the County Board of Commissioners in 2010.

Goyette also said she is keeping busy starting a business to help newly elected officials acclimate themselves to the duties of public service. She is partnering with other retired township employees who between them have more than 200 years of experience, she said