Longtime firefighter hangs up his helmet 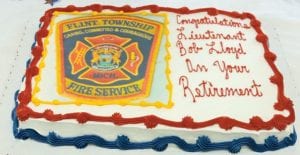 FLINT TWP. — After 38 years of service, Lt. Robert Lloyd of the township fire department, is retiring. He received special recognition during a cake reception at the township board meeting Monday night.

Fire Chief John Ringwelski praised Lloyd for his firefighting and organizational skills. He was the kind of guy who, in the aftermath of a fire, would wipe down tools and return them to their proper place instead of tossing them back on the truck as many do, Ringwelski said.

Lloyd also applied those organizational skills at Station 2, 3327 Flushing Road, where he was stationed most of his career.

“If we had something we could not find, Bob (could),” Ringwelski said. He managed files and radio communication equipment, which are a vital part of operations. As quartermaster, he also managed supplies which are kept at Station Two and could always provide accurate information on what the department had and how much of it. 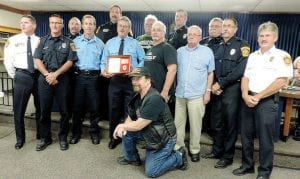 Several current and retired township firefighters attended a send-off for Lt. Robert Lloyd, who is retiring after 38 years. Top, a special cake was served in honor of Lt. Lloyd’s retirement.

Lloyd’s son also served on the fire department for 18 years, Ringwelski said, before presenting him with a commemorative plaque and badge and honorary red helmet, which signifies a lieutenant.

Township Supervisor Karyn Miller also presented a proclamation from the township board. It acknowledged that Lloyd began service as an on-call firefighter June 7, 1976, became a full-time member Nov. 21, 1994 and was promoted to lieutenant June 17, 1997.

He also served as the Officer in Charge of the department’s Respirator Self-Contained Breathing Apparatuses (SCBA) and managed all base, truck and portable radios and pagers..

Additionally he is a certified Emergency Medical Technician (EMT) and worked with the township fire department ambulance service.

Lloyd received a standing ovation from the board and audience, which included family and several current and retired firefighters on hand to wish him well. Lloyd and his wife Annie have three children and six grandchildren.