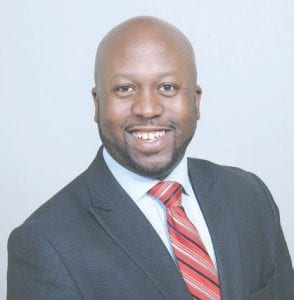 FLINT – Torchio W. Feaster held a press conference Feb. 18 to announce he is a candidate for 67th District Court judge in Genesee County in the Nov. 3 general election.

Feaster made his announcement in front of a group of supporters at the Quinn Chapel Church, 2101 Lippincott Blvd. Flint.

After serving the Flint community for several years as an attorney and blight court judge, Feaster said he is committed to making Flint a better place and ensuring Flint residents seeking justice, get just that.

Feaster is a Flint native. After graduating from law school, he returned to the area in 2008 and opened his own law firm in downtown Flint. In 2017, he created the Blight Court Program for the City of Flint.

As the “Blight Court Judge” he works to address deteriorated and blighted areas around the city. Feaster also uses his education and experience to serve the community as a pro-bono attorney for the Genesee County Homelessness Court where he addresses the needs of the homeless.

“I grew up in Flint,” said Feaster. “I know the people of Flint have been through a lot. However, I also know that the people of Flint are resilient, and we can’t lose hope because better days are ahead. I want to do what I can to help. It would be my honor to continue serving this community as the next 67th District Court Judge.”