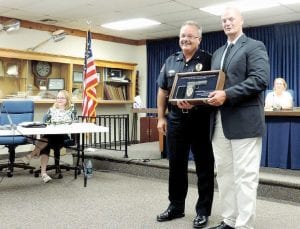 FLINT TWP. — Many fond memories and funny stories resurface when the time comes to say goodbye to a co-worker you have known for a long time, said Police Chief George Sippert.

He chuckled over some of them while reviewing a personnel file, but refrained from sharing them during a farewell presentation Monday night for Lt. Robert Battinkoff, who retired last week after nearly 30 years on the force.

Battinkoff’s last day with the township was August 14, but after only two days of retirement, on August 17 he started his new job as Director/ Chief of Public Safety for Delta College near Saginaw.

After joining the township police department as a patrol officer in December 1985, Battinkoff held almost every job assignment and supervised nearly all aspects of police work, including filling in during the chief’s absence. 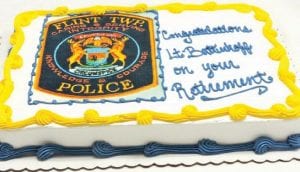 Battinkoff also was instrumental in setting up the Critical Incident Response team and served as its team commander. He served as the administrator in charge of field operations and as the special services and administrative commander.

“He has never turned down a job,” Chief Sippert said. “He’s always been willing to take on jobs that others didn’t want to do and take the leadership role on it.”

Battinkoff also is believed to be the most decorated officer in the department, having received numerous awards and citations during his tenure.

Township Supervisor Karyn Miller presented him with a framed proclamation from the board of trustees, acclaiming many of those accomplishments.

“Battinkoff has been an authoritative voice for public safety not only in our community but in surrounding communities and is well know for his analytic ability and calm approach to all of his public service endeavors,” Miler said, reading from the proclamation.

Afterwards, Battinkoff received a standing ovation from the packed audience before a traditional 15-minute break for cake, coffee and conversation with well-wishers.

“I loved my career here,” he said. “I appreciate the opportunity at Delta but I already miss being here.”

Well-wishers in the audience included his family, retired and current officers and Ralph Roland, who was Battinkoff’s field training officer and guided him through 22 calls on his first day on the job on a cold December day back in 1985, Chief Sippert said.