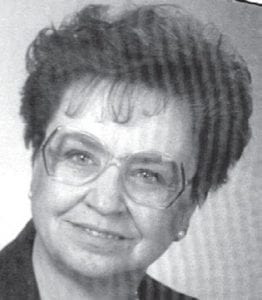 FLINT TWP. — “It is shouting time in Heaven” declared the obituary for Sandra Wright, five-term township treasurer who passed away Christmas Eve. Wright died after attending a Christmas cantata at her church, which was one of her favorite places, according to the obituary.

Wright retired as township treasurer in 2012 after 20 years of service. Elected in 1992 in the first term of former U.S. President Bill Clinton, Wright went on to become the township’s longest serving treasurer. Upon her retirement, she received numerous proclamations from township, county and state representatives.

In a State of Michigan tribute to Wright presented by then State Representative Jim Ananich (now a state senator), he said her retirement marked the end of an era.

“At a time in our history when local officials face many challenges and changes, Sandra Wright has responded with energy and heartfelt concern for the citizens, businesses and institutions of Flint Township,” Ananich read from the proclamation, which also praised Wright for her community leadership.

At her retirement party, an eight-page full color program provided many more details about Wright’s personal and political life. Little known facts about her included that she was instrumental in starting the homecoming parade when the Carman and Ainsworth school districts merged; was awarded a Key to the City of Flint for her work in substance abuse; and that she’s a professional seamstress able to produce quality prom and wedding dresses.

Wright was active in the Disability Network after losing a leg in 2009, due to illness.

She was a member of the gospel music group “The Temples” for 14 years, which achieved a Top 10 finish at a National Quartet Convention in Nashville, Tenn.

One of her sons is also an accomplished musician with a national following. The Rusty Wright Band provided the entrainment at Wright’s retirement party.

Wright was born on October 30, 1943, in Flint. She was adopted at birth by two wonderful parents.

In her acknowledgments at her retirement party, Wright said she always tried to do the right thing in her public service career.

“I had a goal in 1992 of being the best that I could be in serving the people and 20 years later I feel confident that I have served with honesty and integrity and hope that something I did was a compliment to the residents and will leave it a better place,” Wright said.

Prior to her term as township treasurer, she was an accountant for Radisson Hotels.

Funeral services for Wright were held on Wednesday December 28 followed by burial at Evergreen Cemetery.