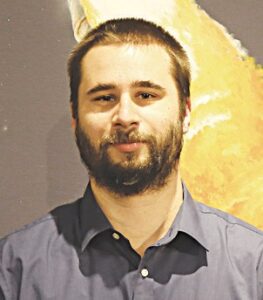 FLINT — As a kid growing up in the Flint area, Patrick Ross enjoyed visiting the Longway Planetarium for field trips and theater shows.

Now, at age 29, he’s leading operations at the planetarium as its new manager.

Ross, who lives in Burton, started in his position on Oct. 4. As planetarium manager, he supervises three part-time presenters, develops content for visiting school groups and labs/classes and oversees the purchase of new shows for the planetarium. He also fills in to lead presentations from time to time.

In his college years, Ross attended the University of Michigan-Flint for his undergraduate degree and worked at Longway Planetarium as an intern presenter. Although physics was his original field of study, Ross said that he was offered the intern position at Longway to fill a gap semester between his undergraduate degree and grad school, which pushed him into focusing more on space.

Before coming back to Longway, Ross received his masters from the University of Toledo and worked three years at Texas A&M-Commerce as a planetarium manager.

Outside of his planetarium duties, Ross’ main field of astronomical research involves globular clusters, which are densely packed masses of ancient stars that have gravitationally bonded to each other.

Ross also enjoys studying the night sky and searching for his favorite constellation, Orion, and his favorite planet, Saturn.

“It’s easy to take people outside and show them the rings of Saturn,” he said. “You can spot it even if you just have a nice pair of binoculars. Whereas some of the other planets are a little bit harder to see and you usually need to have a telescope to point them out.”

“With Digistar 7, we have the ability to dynamically capture and survey the night sky and cast it on the dome,” he said. “Planets in our presentations look nicer and more detailed, and atmospheres and volumetric clouds look more realistic.”

Digistar 7 also includes updated astronomical databases and fully interactive, adaptive all sky surveys, allowing guests to “fly” through the universe in unprecedented detail as they sit back and watch a presentation on the dome.