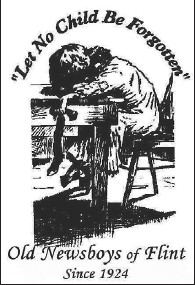 FLINT TWP. — Flint Old Newsboys (ONB) is setting sites for its annual newspaper sale fundraiser. For the second year, the ONB will no longer be conducting its annual fundraiser in the public roadway in the township but will continue doing so on most street corners countywide with some exceptions noted below.

The Flint Township Board of Trustees passed a township Traffic Safety Ordinance, effective in March 2015, banning street solicitation. That impacted panhandlers and charitable groups like ONB which has collected funds on public streets for about 95 years. The ONB new game plan is to set up collection sites in high visibility parking lots and other high-foot traffic areas. The process is not complete but so far confirmed sites this year will include:

*Speedway gas stations at Corunna and Linden roads, Corunna and Elms road and Miller Road at I-75/

Other potential sites not confirmed yet may include the parking lot at the old K-Mart on Miller Road; Z’s Diamond on Linden and Miller and a Farm Bureau office on Elms Road, said Lisa Kirk ONB manager of Programs and Volunteers, who is spearheading the reorganization of ONB’s Volunteer Program.

Kirk also is working to set up offstreet collection sites this year in Flushing and Fenton, based on a formal opinion issued this summer by Michigan Attorney General Bill Schuette which concluded that the state’s “Uniform Traffic Code, prohibits a person in the improved portion of a roadway from soliciting contributions in support of a civic or charitable organization from the occupant of any vehicle.”

“The Uniform Traffic Code provides that “[a] person shall not stand in a roadway for the purpose of soliciting a ride, employment, or business from the occupant of any vehicle. A violation of this rule constitutes a civil infraction.

“This office recognizes the important services charitable and civic organizations provide to Michigan citizens, and is cognizant of the constitutional protections accorded their solicitation activities in traditional public forums,” Schuette said.

Kirk said she is working on setting up Flushing area collection sites at a Speedway at Pierson and Elms Road and down Elms Road into Mt. Morris Township. Those sites had not been confirmed at press time. Kirk said she still is working on sites in the Fenton area and did not want to release any information prematurely.

Flint Township officials took a lot of heat when they adopted the controversial Traffic Safety ordinance which started out as a way to resolve the township’s flourishing panhandling problem. The township’s position that it was complying with state traffic law has now been seconded by Schuette’s opinion.

“I’m disappointed that we can’t collect in the streets in some areas since we have been doing it since 1924 and it’s our main fundraiser for the year,” said Chris Hamilton, ONB executive director.

“We will have to think outside the box in going forward and come with some innovative ways to raise money. Old Newsboys means a lot to this area. Since this past Christmas we have taken care of over 800,000 needy kids at this special time of the year. We do have the jolly guy in the big red suit on our side.”