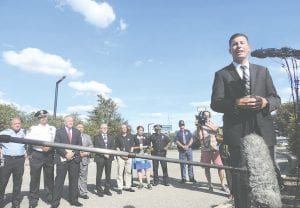 It was a year that brought two threatening evacuations at Bishop Airport, a controversial drive to change the township’s name, economic development strives to reclaim Brownfields and establish a Downtown Development Authority, technology upgrades, naming of two fire stations in honor of past chiefs and big wins for Carman-Ainsworth robotics teams. – Photos by Rhonda Sanders

FLINT TWP. — Two evacuations at Bishop International Airport topped the list of headlines in 2017. Other major news included an ongoing effort to change the township’s name, major steps made in economic development, technology upgrades, a new water source and a championship season for Carman-Ainsworth robotics teams.

Events at Bishop Airport included a bomb scare and a terrorist attack- both in June. The FBI investigating a June 21 knife attack on a police officer at Bishop International Airport, has defined it as an act of terrorism. The victim, Lt. Jeff Neville, who was stabbed in the neck, has recovered from critical injuries. His attacker was identified as Amor M. Ftouhi, 49, from Quebec, Canada. Ftouhi was indicted July 5 in Flint federal court on charges of committing an act of violence at an international airport and interference with airport security.

An earlier incident on June 8 involved a suspicious bag that proved to be harmless. State, local and federal authorities along with bomb-sniffing dogs, descended on the airport to investigate the unattended bag, found near the gift shop. It contained unusual electronic wiring that was not connected to any device. 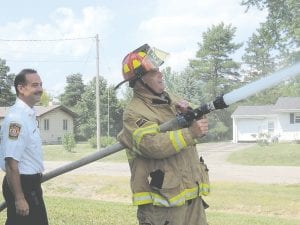 In other news, a township name change effort got underway in 2016, resulting in a volunteer committee meeting for several months in 2017 before making a recommen- dation to the township board that included ten new names. Carman Hills was the top vote-getter but other suggested names are Garland, Dyewood Heights; Genesee Hills; West Haven. Westwood Hills, Oak Hills, Torrey Heights, Bristol Heights and Rolling Hills. Carman, Dye, Bristol and Torrey reflect names of township founders and Garland actually was the township’s name from 1855 to1856.

The effort was put on hold when the township attorney raised questions about the legality of the name-change process. That has resulted in proposed state legislation to simplify language for any municipality interested in a name change. 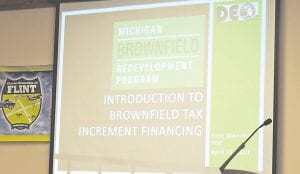 After about four years in the works, water provided by the new Karegnondi Water Authority and Genesee County Water Treatment Plant arrived in the township in mid-December. It completed the switch from water provided by Detroit but the water comes from the same source – Lake Huron.

Economic development also took a big leap forward this year with the reactivation of the Economic Development Corporation. Starting in May the group began holding monthly meetings resulting in two significant plans. One established a Brownfield Redevelopment Authority focused on getting distressed, obsolete and contaminated properties back up to speed.

The EDC also proposed establishment of a Downtown Development Authority (DDA) in the central business district and two Corridor Improvement Authorities on Beecher Road and Bristol Road – all aimed at economic improvements. 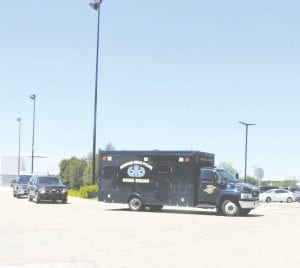 The township board is now in the process of establishing the DDA and CIA districts, hopefully by a May deadline. An improvement plan is being developed that will list the potential projects to be done under the plan.

Technology had a starring role in township business. Innovations include implementing Acela software to make board packets accessible to the public. Software also was purchased to update and organize cemetery records. Security software has been added to the township hall -requiring a card key to enter the main part of the building.

Carman-Ainsworth robotics teams also had a noteworthy year. The VEX Robotics teams at the Middle School not only won the Michigan State Championship but went on to a good showing at the World Competition. Likewise, the FIRST Robotics team at the high school racked up enough regional scores to qualify for the World meet.

Last but not least, the year brought many changes to the fire department. Most notably, a new Fire Chief, Thomas Stadler, was promoted, filling a three-year vacancy. Three full-time firefighters were hired for the first time in about 15 years. Also. two fire stations were named for former fire chiefs Don Rowley and Jack Maxwell.