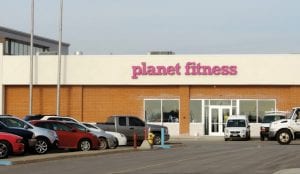 NEW YEAR, NEW YOU — Make 2015 the year to keep your resolution to get fit and healthy. Coming to help in the new year is a Planet Fitness health club at Genesee Valley Center mall. A brand new exterior entrance has been created on the south side of the mall, accessible from the parking lot between Burlington and Macy’s. Equipment is being moved in but mall officials say the opening date is not yet set. Planet Fitness is known for its affordable prices. Planet F also started the new year off right as the official fitness sponsor of the Times Square New Year’s Eve celebration in New York and was featured on the “Dick Clark’s New Year’s Rockin’ Eve with Ryan Seacrest 2015,” according to a corporate press release.

One of the biggest bombshells of the year came in late May when the U.S. Supreme Court finally handed down its ruling on off-reservation casino loca- tions. A proposed casino site here on 28 vacant acres at Dutcher and Lennon Roads has languished since 2010 awaiting this decision.

State of Michigan vs. Bay Mills Indian Community challenged the tribe’s right to establish tribal lands outside of the reservation. In a majority 5-4 decision, the Supreme Court ruled that sovereign immunity under the Indian Gaming Regulatory Act protects the tribe from being sued by the state but does not preclude “other legal actions.”

Though the high court ruling seemed to support the Bay Mills Tribe, which owns the Flint Township site and others in Michigan, the interpretation was ambiguous. 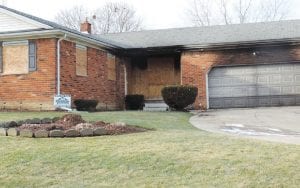 HOUSE FIRE — This home on Jacque Street was badly damaged by a fire on Sunday Dec. 21. Fire officials could not be reached for more details about the cause or extent of the damage. No injuries were reported. — R.S.

Michigan Attorney General Bill Schuette, who spearheaded the lawsuit, interpreted the ruling as a victory for the state.

“The 5-4 decision upheld the injunctive power of states to sue tribal leaders to shut down illegal casinos, and reaffirmed the state’s authority to bring criminal charges against anyone engaging in illegal gaming on state lands,” he said in a public statement.

Since then, the only sign of life at Dutcher and Lennon has been roaming deer. There’s been no further word on what Bay Mills plans are for the property.

Another big issue was a looming budget shortfall and possible layoffs which prompted the township board to turn to voters in November for approval of a 3.85 mills increase for Public Safety. It narrowly passed 5,212 to 4,237 and is expected to bring in an extra $3 million this year.

Also generating headlines most of last year was the township board grappling with what to do about a proliferation of street beggars. One advisory committee and two ordinance first readings later, the matter may finally be settled next week when a proposed Traffic Safety Ordinance comes before the board for a second reading an adoption.

The gist of the proposed ordinance bans money from being passed to or from a vehicle in traffic. It does not ban street beggars outright but may challenge them to find new places to stand. Popular spots now include at freeway exits and in front of major stores on Miller, Corunna and Linden Roads.

The first ordinance, which stalled after its first reading, placed restrictions directly on places where beggars could solicit money including in the street, close to doorways, bus stops and ATM machines. It patterned a similar ordinance that passed legal muster on the west side of the state but drew a stern protest here from affected charities and the American Civil Liberties Union.

At the expense of established retailers, requests were increasing for tent sales, aka seasonal sales, by temporary vendors who tend to pop up around holidays. In May, the board passed a moratorium on tent sales – including fireworks – that was not lifted until September – well past Memorial Day, the Fourth of July and Labor Day – three of the major holidays when firework displays are allowed. The board passed a new ordinance recommended by its planning commission that placed tent sale applications in the hands of the building department. It also banned all tent sales by third party vendors not associated with the adjoining business. For example, a temporary fireworks tent can no longer be set up in a retailers parking lot unless that retailer sells fireworks inside the store as well. Ditto for car sales.

Responding to numerous complaints and fears about door-to-door soliciting the township board established a No Soliciting List that is kept by the township clerk and given to solicitors with instructions not to approach homes on the list.

Another prominent story in July involved the fatal shooting of a 23-yearold Flint man by a township police office during a traffic stop. The officer alleged that he fired his weapon in self-defense after the suspect tried to run him over in an attempt to flee.

Michigan State Police conducted an external review/investigation of the shooting and ultimately ruled it justified. Investigators located a pistol in the vehicle and the investigation revealed that the victim was a convicted felon and on parole.

Rounding out the top new stories of the year are several contenders, including:

– A recall attempt against the township supervisor, still pending

– New township interactive maps were printed and made available online for the first time in years.

– Road construction crews completed the extension of the Genesee Valley Trail across Linden Road to connect it with trails in the Flint Township Park off Norko Drive.

– Township Board passed up an offer to buy Pirates Park, aided by a state grant.

– Township Board sold two vacant parcels on Charter Drive for $110,000.

– Weather highs and lows including the third heaviest snowfall in recorded history for the county which brought up to 17 inches of snow, and sub-zero temperatures between Jan. 4-6.