Lots of activity along Miller Rd. 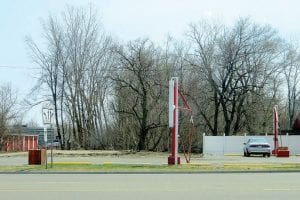 A newly vacant lot remains after the last residential structure on Miller Road in the commercial district between Ballenger Highway and Linden Road was razed last month to make room for expansion of the carwash next door.

FLINT TWP. — Until about a month ago, a two-story, partially brick house with green shutters stood at 3371 Miller Road. It had the distinction of being the last residential structure fronting Miller Road in the commercial district stretching from Ballenger Highway to Linden Road.

Tracey Tucker, township building director, said her children’s civics teacher used to cite the house as an example of changing land uses. It was torn down to make way for possible expansion of Letavis Carwash next door, which owns the property, Tucker said. She added that it has been several years since the house was used as a residence.

That is one of several examples of changing scenery along busy Miller Road where, after a lull in recent years, several new developments are sprouting up.

Until recently, this house on Miller Road was the last residential structure still standing along the busy commercial strip.

Further along the road, heavy machinery has been busy razing two structures at 4477-8 Miller Road and leveling the ground for construction to start on a Panera Bread bakery and restaurant. A 4,316 square-foot building is scheduled for completion in late fall.

Just west of that, work crews have been on site at 4545 Miller Road renovating the former Northwest Tire Center for a new tenant.