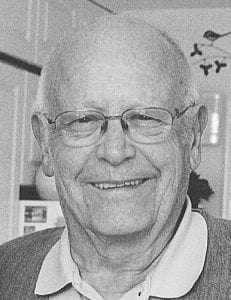 He lived in Ionia and Flint before moving to the Davison area in 1943. He married Mildred Kellogg on June 1, 1952, and they celebrated 67 years of married bliss. They were blessed with five children, 11 grandchildren and 12 great-grandchildren.

Louis was a member of Trinity Lutheran Church, Davison, since 1947. He was an honorary member of Trinity Quilters, serving as coffeemaker. He enjoyed restoring and showing antique cars. His pride and joy were the two cars he restored – a 1926 Model T Ford and a 1930 Marquette (a companion car for the Buick motor car and was manufactured for only one year). He also enjoyed woodworking, including making toys for the grandchildren. He served two years in the US Army during the Korean War, 1952-1954.

He was predeceased by his parents; brother, Earl (Norma) Kosbar; and brother, Fred Kosbar.

Memorial contributions may be made to the American Heart Association, Alzheimer’s Association or Trinity Lutheran Church in Louis’ name.