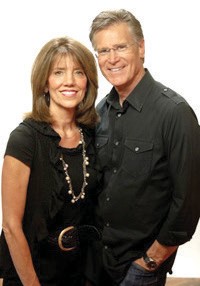 Dr. Emerson Eggerichs and his wife Sarah have been married since 1973. They developed the faithbased Love and Respect Conference to improve male-female relationships.

FLINT TWP. — Along with traditional flowers, chocolates and romantic dinners-for-two this Valentine’s Day, some local couples will give each other the gift of a better understanding of their emotional needs.

“Love and Respect” is the premise of a live two-day conference designed to strengthen relationships and marriages, on Feb. 13-14 at Flint Central Church of the Nazarene, 1261 W. Bristol Rd.

Sponsored by the Eastern Michigan District Church of the Nazarene, the conference will be led by Dr. Emerson and Sarah Eggerichs of Grand Rapids. He is the author of several books including “Love and Respect” an award-winning bestseller about improving marriages. He also is the founder and president of Love and Respect Ministries. The Eggerichs created the Love and Respect Conference to help couples heal and restore relationships. It has been presented nationwide to live audiences and is being held in Michigan for the first time in several years, according to promoters.

Conflict resolution and relationship building materials applies to men and women who are married, divorced, separated, dating and single.

Registration is open to everyone on a first-come, first-served basis and is expected to attract many couples from out of town.

Thereafter, the general admission price will be $55 per person.

More information about the conference including the full two-day itinerary is provided on the registration site.

Copies of Eggerichs’ book, which has sold more than 1.6 million copies, also can be purchased. He will be signing copies during the conference.