Lowe’s beautifies area “one island at a time” 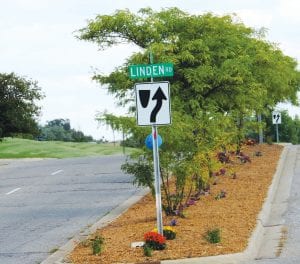 More than 90 perennials add a spot of color and beautification to a traffic island on Taft Street, thanks to a volunteer crew from Lowe’s home improvement store.

FLINT TWP. — An unsightly patch of “worn down” grass at a traffic island on Taft Street was transformed last week by a beautification team from Lowe’s home improvement store.

Lowe’s Heroes is a nationwide program in which a team of employees volunteer time and effort to making a difference in the community, said Dan Karpinski, manager of the Corunna Road store.

“Each year Lowe’s lets us do a donation for community awareness or anything to help the community,’’ he said. Funds are limited but the goal is to do as much as possible to “make the community more livable.”

This year the team opted to tackle traffic islands on Taft off Linden Road and another in front of the store off Corunna Road. The Corunna Road project still is pending but crews went to work last Monday and Tuesday to spiff up the traffic island on Taft between the McDonald’s restaurant and the Lincor Plaza.

“We pulled up grass and planted about 90 flowers,” Karpinski said. Mulching completed the fully landscaped look.

The scruffy grass was replaced by a variety of perennials including mums, astra, hostas, corabells and more, Karpinski said.

“We will try to do more of them, one island at a time,’’ he said, adding that Lowe’s always is willing to try to help any local organization with a variety of community service projects.

Lowe’s has a done a lot of work with Keep Genesee County Beautiful, he said. Last year, Lowe’s corporate gave KGCB a $20,000 grant to clean and beautify 12 Flint-area parks.

Lowe’s Foundation has contributed more than $1 million to support larger Heroes projects, with grants of up to $50,000 per project in the United States and Canada, according to information provided on its web site.