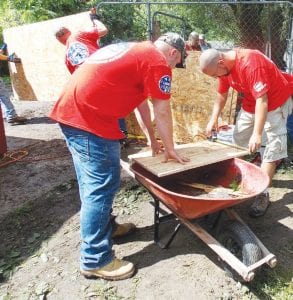 Robert Treadwell of Burton and Jeff Arms of Mt. Morris were among the 25-plus “Lowe’s Heroes” who donated their time to make improvements at PAWS animal rescue.

CLAYTON TOWNSHIP – Neither hoards of marauding mosquitoes, nor bursts of torrential rain, nor fits of subtropical heat and humidity could stop the 25-or-so volunteers from Lowe’s Home Improvement who helped spruce up a local animal shelter.

Lowe’s donated $2,500 worth of supplies and their staff donated their time to help PAWS, a no-kill rescue. The work is part of the home improvement retailer’s benevolent program, Lowe’s Heroes.

“We’re thrilled,” said Glenda Beatty, PAWS owner and operator. “This is going to help keep the animals warm and safe and dry.”

The volunteers installed a new roof on the barn, painted the feline shelter, installed new paneling in one of the dog shelters, removed old fencing and built new kennels, said Beatty.

The work would have taken PAWS volunteers years to accomplish on their own, she said. 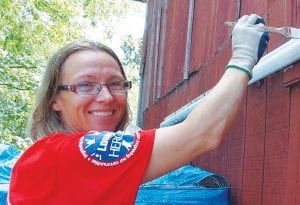 Hero Marie Slater of Mundy Township applies a fresh coat of paint to the barn at PAWS.

Williams, of Clayton Township, became aware of PAWS through her cousin, Christine Eickleberry, a shelter volunteer who often speaks of the animals and their needs.

“During the morning staff meetings, they ask for suggestions (for projects),” said Williams. “I’ve known that there’s been a need for help at the farm for a while.

“I explained that (Beatty) has been doing this for years with just volunteers and donations. I said this is a humanitarian project and it concerns animals. We’re all animal lovers here.”