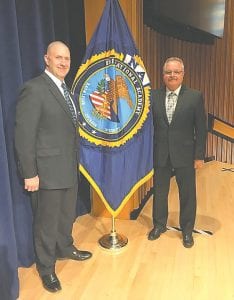 FLINT TWP. — Township Police Lieutenant James Baldwin joined a select group of trained leaders, with his recent graduation from the Federal Bureau of Investigations National Academy in Quantico, Virginia. After ten weeks of training while absent from his home and family, Baldwin graduated in the 268th session of the national academy, where officers from all over the United States and beyond, participate in a wide range of leadership and specialized training, according to Police Chief George Sippert.

Participation is by invitation-only for each class of about 220 officers who are leaders and managers of state, local, county, tribal, military, federal, and international law enforcement agencies. Officers share ideas, techniques, and experiences with each other, creating lifelong partnerships that transcend state and national borders, according to information provided on the FBI Academy website. They also can take undergraduate and/or graduate courses in law, behavioral science, forensic science, understanding terrorism/terrorist mindsets, leadership, communication, and health/fitness.

“We work hard to prepare our leaders for the future,” said Chief Sippert, who is himself an Academy graduate from the 205th session in 2001.

Other Flint Township administrative police officers who have attended the FBI National Academy in Quantico are:

James Iacovacci attended in 1999, the 198th session. He retired from the department as a Lieutenant in 2008.

Tim Jones attended in 2002, the 209th session. He retired from the department as a Lieutenant in 2014. Lt. Baldwin joined the township police department in 1997. He has served in many capacities including patrol officer, community policing officer, school resource officer, detective, road patrol supervisor and detective sergeant where he supervised operation of the Investigation Unit.

The Academy was created in July 29, 1935 in response to a 1930 study by the Wickersham Commission that recommended the standardization and professionalization of U.S. law enforcement departments through centralized training.