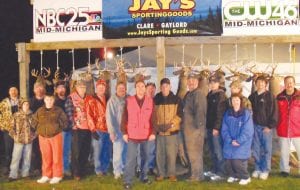 The final tally of the night was captured at the NBC25 and Jay’s Sporting Goods Trophy Deer Pole.

CLIO
— Some see it as unlucky, but 13 deer were entered into the the NBC25 and Jay’s Sporting Goods Trophy Deer Pole Monday at the televison studio. Ed Vargo of Caro won the big prize of a $40 Jay’s gift card. All the remaining hunters are in the running for the grand prize to be drawn for at the end of firearm season, says host Mark Torregrossa of NBC25.