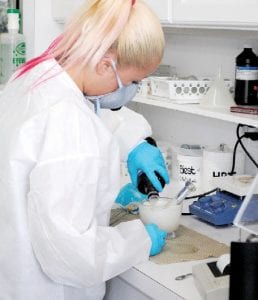 Certified Compound Technician Rachel Hartman creates a topical pain cream in the compounding laboratory. Pharmacist Mark Luea said the topical cream is non-narcotic, the pain goes away in under two minutes and the pain stays away for half of a day.

SWARTZ CREEK — Since opening the full-service Luea Pharmacy in 1982 at the age of 27, Mark Luea has witnessed many changes come to his store but most of those changes have come since 2004 when he began offering compounded prescriptions and installed a state-of-the-art compounding laboratory.

“We started compounding in 2004 and since 2004, this is the fifth time we’ve had to remodel the compound lab to enlarge it,” Luea said. “It started as room about eight-by-twelve and over the years, it’s been growing. When it’s complete, the lab will take up approximately one-third of the total floor space of the pharmacy.”

Compounding is the traditional method of preparing customized medications to meet unique physician and patient needs, such as when a particular dosage or form is not commercially available or the patient is allergic/sensitive to inactive ingredients. Luea Pharmacy specializes in compounding, and has Certified Compound Technicians on staff. Luea considers his pharmacy one of two in Genesee County that have state-of-the-art compounding laboratories. 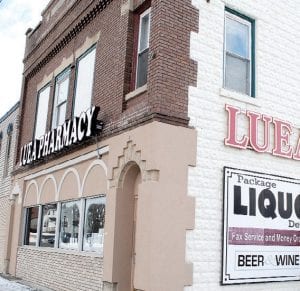 All compound technicians have been sent to Houston for specialized, oneweek training to achieve certification. Along with certification, Luea and his staff belong to the Professional Compound Centers of America (PCCA).

“You buy the franchise from PCCA, which is an international organization with offices around the world. We have instant access to over 7,000 formulas to make prescriptions to treat everything from head to toe. Compound medicine is not for all, it’s not a one-size-fits-all,” he said. “We buy a majority of our chemicals and hormones from PCCA for high-quality standards.”

“Everyday, the post office picks up our national and international deliveries,” Luea said of the prescriptions from the compounding laboratory. “We’re shipping to 35 states and two foreign countries, and we offer free shipping.” Along with free shipping, Luea Pharmacy accepts insurance for the compound prescriptions. If a patient does not have insurance, he/she can still purchase the prescription. “We try to keep costs and fees bare minimal,” Luea said. Most patients receive their compounded prescriptions within two weeks, and most are processed within 24 hours and then shipped directly to the patient.

In the last six years, Luea said the public perception of compounding prescriptions has changed. “The 40-million women baby boomers have changed it,” he said.

The compounding laboratory is all enclosed to ensure that no chemicals get out into the other parts of the pharmacy, which include the traditional retail side and the nursing home division. The laboratory has also a commercial dishwasher and sink for cleaning supplies. One piece of the equipment in the compound laboratory is a Flow Hood from Flow Sciences, Inc. “It’s a $15,000 piece of equipment,” Luea said.

Technicians also use a state-of-theart capsule machine which makes 300 capsules “in one pop,” he said.

With the increase in patients for compounded prescriptions, Luea Pharmacy is currently installing a retail, sterile compound room in the pharmacy. The sterile room is all prefabricated and features special ventilation.

“We can dismantle the sterile room and move it anywhere if we have to,” Luea said. “It’s inspected and stateapproved two times a year. We expect to have the sterile room ready to go in approximately two months with approval.”

Along with doctors, Luea said the pharmacy is seeing veterinarians using the compounding laboratory for their patients. “Vets use a lot of sterile compounds,” he said. Luea also plans to use the sterile room to make IV infusions, with the ultimate goal of using it for augmenting cancer treatment.

When it comes to receiving prescriptions from doctors locally, nationally and internationally, Luea credits his establishment of three, regenerative anti-aging clinics: one in Cincinati, Ohio; one in Columbus, Ohio; and one in Lawrenceburg, Ind.

“I’ve taken all my money and resources, and have gone into business with fellowship-trained physicians to practice anti-aging medicine, and then I get the prescriptions,” he said.

Along with these business arrangements, Luea also speaks at seminars where he meets physicians who invite him to teach and train their staff on anti-aging medicine.

His interest in anti-aging medicine began in 2004 when he began receiving calls from women on female issues.

“I didn’t know how to answer these questions, so I went to seminars on this by PCCA and I took doctors with me,” he said. “One doctor told me to do a fellowship in anti-aging medication and it’s now my specialty.”

Luea did his fellowship through the A4M, which is the American Academy of Anti-Aging Medicine, a worldwide organization. Luea was in the first graduating class of the two-year, fellowship program, which is relatively new.

“It taught heart health, brain health, intestinal health, and was all based on chemistry and physiology. Then, the medical director said for me to continue my studies, so I am now enrolled at the University of South Florida’s medical school and am working on a two-year master’s program in physiologic medicine. When I graduate, I will be one of a handful of pharmacists with that degree.”

In addition to its compounding laboratory, Luea Pharmacy offers durable medical equipment, such sales and rentals of wheelchairs, walkers, canes, crutches, orthopedic bedding and bathroom safety aids; medical, surgical and orthopedic supplies, such as ostomy/urological supplies and incontinent supplies; wholesale medical supplies; and personal home care services, such as diabetic care services and respiratory therapy aids. His brother, Joe Luea who is also a pharmacist, helps run the pharmacy and his sister, Aimee, also a pharmacist, works there.

“We’re all three pharmacists,” Luea said. “I’m a second-generation pharmacy owner. My uncle George Bokor owned Bokor Pharmacy at the corner of Fenton and Atherton Rds. for many years. Because of our uncle, we fell into it.”

Those entering Luea Pharmacy will notice the remodeling is not contained to the compounding laboratory.

The traditional pharmacy space is being remodeled, and the pharmacy’s nursing home division recently got its own space after Luea purchased the adjacent building where Soupal Dry Cleaners used to be, and combined the two buildings.