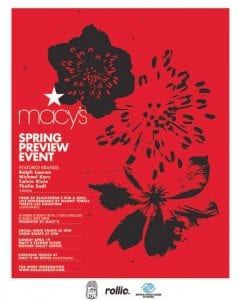 FLINT TWP. — With the news that Macy’s-Flint will become a new district office for the chain, is an announcement that the Genesee Valley Center store has partnered with Rollic Group (Flint Town Get Down) to host a Spring Preview Event at 4 p.m. on Sunday, April 19 on the second floor of the mall department store, according to a press release.

Macy’s-Flint — one of Michigan’s highest performing locations—is part of Macy’s North Central District. Macy’s is organized into regions (groups of states, or parts of states), according to the corporate web site. Those regions are further divided into districts. The North Central region has nine districts and approximately 114 stores. The Detroit District has approximately 10 stores and the Michigan district has 11, for a total of 21 stores that together employ about 4,300 workers.

All proceeds from the Spring Preview Event at Macy’s-Flint will benefit the PAL and Boys and Girls Club youth programs of the Flint Haskell Youth Center.

The event will feature a social hour with a live performance from Manny Torres and food provided by Blackstone’s. Social Hour will be followed by a runway show for a first look at the Spring Collections of brands such as Ralph Lauren, Michael Kors, and Calvin Klein, and a Private Shopping event offering a special attendee friends and family discount.

For a $35 donation or a group rate of five for $150, admission passes can be obtained at Macy’s-Flint Executive Offices on the second floor of the store. Store hours are Monday-Saturday 10 a.m. to 9 p.m. Passes also can be purchased at the event. Admission is limited. Doors open at 3:30 p.m.

The Spring Preview Event is an opportunity for local businesses and residents to enjoy viewing spring fashions while supporting a worthy cause.

The Flint Police Activities League (PAL) provides programs to cultivate and improve moral and civic standards among youth and to foster greater positive communication between police and the community, according to the PAL website at www.flintpal.org/wordpress/

“We are incredibly endowed with a passion to become involved in the grassroots and social development of Flint and the surrounding area,” said Theresa Wright, vice President of Store Management at Macy’s- Flint, “Though our sector is fashion and retail oriented, our interest is in creating an environment where Macy’s shoppers and Flint residents will discover how Macy’s is a part of the engine driving Flint back to its rich history and tradition. We have a lot in store, and this is only the beginning.”