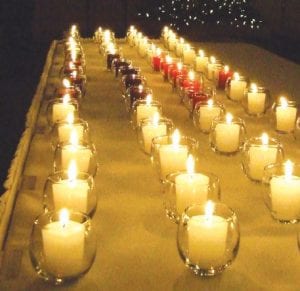 Candles lit in memory of loved ones glow at the recent annual vigil held by local volunteers of the Genesee County Mothers Against Drunk Driving chapter.

GRAND BLANC TWP. — Thirty-two years ago, MADD was formed in the bedroom of one of its victims.

Walker and a few dozen others whose lives have been impacted by drunk driving attended a vigial for victims on Dec. 8, at the First Baptist Church in Grand Blanc.

Although this is an annual event for the organization they want people to know their mission is to first be there for victims and their families. The main outreach of MADD’s Victim Services is providing emotional support and advocacy in the criminal and civil justice systems, including accompanying victims and/or survivors to court.

Connie Ayres is also a member of MADD who attended the vigil in honor or her daughter, Amanda Siner, who passed away in 1996. Ayres said it was an emotional milestone in that Dec. 12 marked 16 years since her 16-year-old daughter was lost to drinking and driving.

She is passionate about the fact that drunk driving doesn’t have to happen if people plan properly.

“These people are all dead because someone didn’t make a plan or didn’t follow it,” she said.

“There’s a correlation between having a good time and death,” Ayres added. “People don’t think it will happen to someone like them.”

She was also joined in the vigil by Township Police Officer Wes Evans. It is traditional to have a law enforcement officer to hold the candle lighter and to serve as the person who lights candles for victim’s whose families are unable to attend the event.

Walker also spoke of her recently deceased friend, John Antos of Flushing, who was a an example of “…the caliber of people involved in MADD.” Walker stated he was a past president of MADD and fairly well known in the Genesee County area.

She added Antos came to MADD events until his health failed and said, “The world is a better place because he lived in Genesee County.”

McGee said, “ I am honored to be a part of this sacred ceremony,” and read “For that I am Thankful,” a poem by Darcie D. Sims. Ron Krueger, another MADD volunteer, attended and spoke at the candlelight vigil in honor of his son Philip who survived a drunk driving crash. “This is a community we did not choose to be a part of and are sad to be a part of,” Krueger stated.

A total of 55 candles were lit at the ceremony, for the victims known of in the last year, including five survivors, and 10 victims so far in 2012.