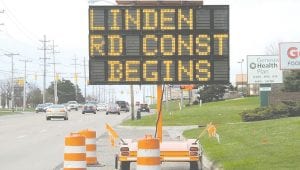 FLINT TWP. — Road construction crews have rolled out the orange barrels to start nearly seven months of reconstruction work on Linden Road between Lennon and Calkins Roads. The project began Monday, April 17, and is targeted for completion on November 10. Motorists are advised to seek an alternate route or plan for delays while traveling Linden Road.

The project, now underway, will be broken into four stages. The first stage begins 700 feet south of Corunna Road and extends north to Calkins Road, according to a press release from the Genesee County Road Commission. Traffic will be maintained using the east side of Linden Road. The western leg of Court Street will also be under construction and will be closed to traffic. A detour sign will be posted.

This project is funded by a combination of federal and road commission matching funds. The estimated project cost is about $4.8 million. — Rhonda Sanders