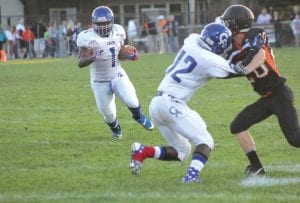 Malik Seales (1) cuts behind a block by Demarion Allen for some of his 148 yards at Flushing last Friday.

The Cavaliers are going to be a lot better with him.

The senior running back came off an injury to play his first game of the season last Friday and scored three touchdowns in Carman- Ainsworth’s 44-0 win at Flushing.

Seales rushed for 148 yards on just eight carries as the Cavs, 4-1 overall, opened Saginaw Valley League-South Division play at 1-0. Flushing fell to 1-4 and 1-2.

Tyquice Jackson also had a good night with 73 yards and a touchdown on eight carries, but Seales was the highlight.

Carman-Ainsworth took control early with four touchdowns in the first half, starting with Lorenzo Redmond’s 6-yard run just 1:05 into the game. Connor Storms kicked the first of his five extra points for a 7-0 lead. Flushing set it up with a fumble on its first play from scrimmage, and Carman-Ainsworth’s Christian Smith recovered it at the Raiders’ 15-yard line.

Demarion Allen set up the Cavs’ next score, intercepting a pass and returning it to the Flushing 37, then carrying to the Raiders’ 13 on the next play. Seales took it in from there for a 14-0 lead with 2:55 left in the first quarter.

In the second period, Storms ran a fake punt to the Flushing 33, and Seales eventually cashed it in for a 1-yard touchdown run with 8:31 left in the half.

A penalty wiped out a 65-yard punt return by Tyler Minor, but Carman- Ainsworth got on the board one more time in the half on Storms’ 36-yard touchdown pass to Bryant Hudson with 34 seconds to go before intermission.

Seales broke an 80-yard touchdown run in the third quarter for a 35-0 lead that triggered a running clock. Storms tacked on a 21-yard field goal in the fourth quarter and Jackson finished the scoring with a 23-yard touchdown run.

Storms hit two passes for 41 yards while splitting time at quarterback with Jevonte Alexander, who was 5-of-9 for 53 yards. Brandon Walker caught four passes for 47 yards, and Hudsonn had two catches for 42 yards. Allen and Darryl Johnson led the defense with seven tackles each.