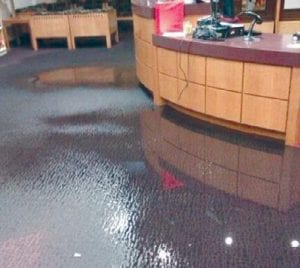 The Genesee District Library branch at Genesee Valley Center mall was closed over the weekend due to flooding caused by a broken water valve.

FLINT TWP. — The Genesee District Library branch at Genesee Valley Center mall has been closed about a week due to flooding.

The flooding, discovered last Thursday morning, was caused by a problem with a faulty water valve, according to Trenton M. Smiley, GDL community relations officer.

The GDL branch is located in the Sears corridor near an outside entrance facing Linden Road. An arcade business next door was the only other mall business affected by the flooding, Mall management did not respond to a request for details.

A professional cleaning crew was on site Saturday with hoses running into the building to suck out standing water on the floor.

As of Monday, Smiley said library personnel still was in the process of drying out the carpet. He said it was uncertain when the library would reopen but speculated it could be Friday or Saturday, at the earliest.

Smiley said to his knowledge no library materials were lost as a result of the flooding.

Nor were any events or classes canceled, which are regularly scheduled at all GDL branches. But Smiley said the mall branch is very popular with patrons who want to check out DVDs or use one of the 22 public computer stations.

It also offers four children’s computers, a copy machine and free Wifi for those who bring in their own laptops or electronic devices.

“During the closing we are directing patrons to use one of our other locations,” Smiley said.

GDL operates 19 sites throughout the county with the closest one to the mall location being the McCarty branch adjacent to the Flint Township Senior Citizen Center on Graham Road.

More than one million patrons use the GDL annually. It is supported by a county-wide millage, excluding the City of Flint.

For more information, visit the GDL website at www.thegdl.org.