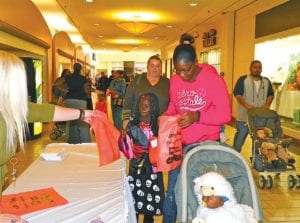 Bookmouse’s Halloween Bash at Genesee Valley Center mall saw a big turnout Saturday as more than 1,000 costumed children, accompanied by their parents, trick-or-treated throughout the mall at participating merchants. Attendance was up from about 750 last year, said Kristen Cassabon, mall marketing manager. Sponsored by the Genesee District Library, which operates a branch in the mall, the event gave children an opportunity to pose for photos with some of their storybook and animated character favorites including Dora the Explorer, SpongeBob SquarePants, Woody from Toy Story and Clifford the Big Red Dog.