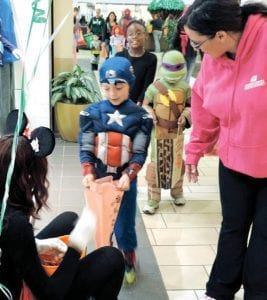 Trick or Treating started at the Genesee District Library in the Sears wing and made its way around the mall during the annual four-hour children’s Halloween bash on Saturday at Genesee Valley Center shopping mall.

FLINT TWP. — This year the Genesee District Library joined forces with the Flint Public Library to draw a much bigger crowd on Saturday for the annual Lil’ Monsters Halloween Bash at Genesee Valley Center shopping mall.

“We distributed over 1,700 goodie bags with 12,250 pieces of candy this year,” said Kristen Cassabon, mall marketing manager. “I think we can attribute the growth and success of this event to our continued partnership with Genesee District Library and the addition of Flint Public Library, this year.”

Few little monsters were spotted in the crowd but an adorable parade of costumed children included several Captain Americas and other superheroes, a couple of box-headed Minecraft characters, a few Mutant Ninja Turtles, Bumblebees, Sheep, a typical assortment of witches and princesses and many other creative characters.

Several mall merchants participated in the trick-or-treating as the children and parents made their way store-to-store to collect candy in specially branded gift bags. 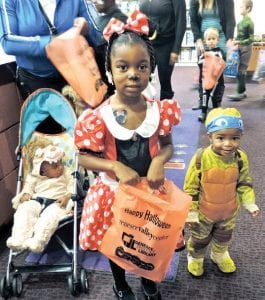 Afterwards, many stuck around for a Spooktacular Comedy Show with Joel Tacey, a performance by the Boys & Girls Club Steel Drum Band, arts and crafts and storytelling by the Flint Public Library. 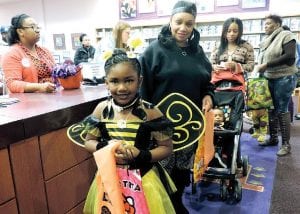