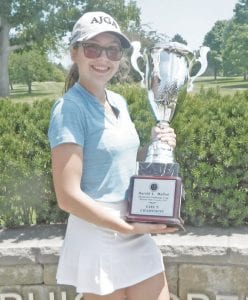 GRAND BLANC – The Flint Jr. Golf Association held its annual Mallon Cup tournament Monday at Warwick Hills with Jackson Foguth and Jolie Brochu, both of Flint Powers, retaining their titles for the second season in a row.

The girls’ side had a three-way tie for first with 84s between Fenton’s Keegan Miller, Lapeer’s Brooke Gibbons and Brochu, while the boys’ tournament saw Flushing’s Andrew Nestor and Foguth finish with rounds of 77 leading to a sudden-death playoff on both sides to decide the champions.

Other top finishers on the girls’ side included Goodrich’s Morgan Swett with an 85, Flint Powers’ Georgina Canavesio with an 89 and Brook Herbstreit, Molly Gundry and Davison’s Brooke Kalisz all finishing with rounds of 91. Elizabeth Gibbs of Goodrich carded a 92 and Neeley Peterson of Swartz Creek, Grace Hoffman of Kearsley and Kamryn Johnston of Davison all finished with 93s. 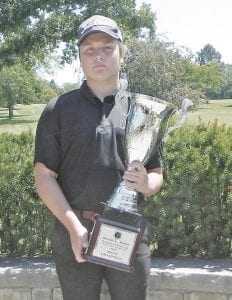 Next Monday, the Jack Nicklaus group heads to the Flint Elks Club to kick off a two-day tournament for the FJGA’s coveted Mancour Cup, where the champion will earn an automatic bid to the Randy Wise AJGA Tournament held at Spring Meadows Country Club in August.

For full results and to see the upcoming schedule, visit www.fjga.org.