Man reportedly missing for more than a week 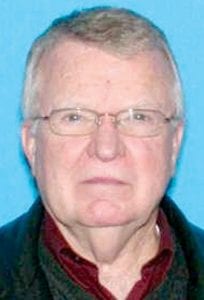 Darwin Smith, 76, reportedly walked away from Genesee Gardens Independent Senior Living Community, 4495 Calkins Road (just east of Linden Rd), where he was recovering from a stroke. He was last seen between 12:30 p.m. and 5:30 p.m. Tuesday, Sept. 3, according to police reports.

He is described as being about 5- feet-10-inches tall (see photo). Numerous search efforts have been conducted since he was reported missing, but as of press time on Tuesday, he had not been found.

The police department has followed up on several tips throughout the past week regarding reported sightings of Smith but none of the reports have led to finding him, said Sgt. Jim Baldwin.

The search has primarily been focused in the Flint Township and Flushing area.

“We will continue to follow up on leads as they are received,” Baldwin said

Anyone with information or possible sightings of Smith are asked to contact the Flint Township Police Department at 810-600-3250. — R. Sanders