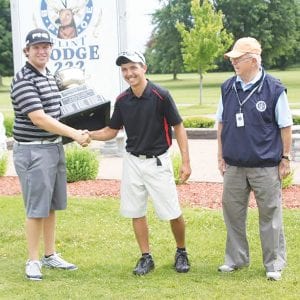 GRAND BLANC TWP. – Joe Montpas tied a 9-hole course record on the back side and pulled away to a 10-stroke victory in the Mancour Cup golf tournament Tuesday at the Flint Elks Club.

The Flushing senior shot 32 on the closing nine holes and finished with a 1-under-par 71, giving him a two-day total of 141 in the Flint Junior Golf Association’s first major tournament of the year. Holly’s Mitchell Hughes was a distant second with 72-79-151, and Lapeer’s Dylan Mullaney (80-77) and Flushing’s Nick Winiarski (78-79) tied for third with 157.

Montpas tied the record set by Fred Couples on Aug. 19, 1981, in the Halo Open Pro-Am, a warmup event for the Buick Open at the time. Back then, the course was flipped, meaning Couples was playing the same holes Montpas did, but as the front nine. Couples went on to shoot 31 on the back to set the 18-hole course record of 63.

“It was fun,” Montpas said after receiving the Mancour Cup trophy from defending champion Alex Finsterwald and FJGA Nicklaus Group supervisor Bill Hense. “I started off rough but finished with my best nine ever. This is awesome. All these people (on the trophy) are such good players.”

Montpas shot 70 on Monday and took a two-stroke lead into Tuesday’s final round. But he struggled to a 3-over 39 on the front nine, allowing Hughes to pull within one shot at the turn.

“I just knew I could play a lot better than I did on the front,” he said of the turnaround. “I wasn’t hitting fairways or greens, but on the back I hit pretty much every fairway and every green and made putts.”

His previous best nine was 33, set several times at his home course of Clio Country Club and matched in Monday’s first round at the Elks Club.

Montpas has been playing golf since age 4 or 5 but only took up the game seriously in his freshman year, when he had to choose between golf and baseball. He has played on the Flushing varsity the last two years and tied for third in the Div. 1 state meet this year. He has yet to receive any college interest but hopes to play at that level.

Montpas took home the Mancour Cup but will have to bring back the Mallon Cup he won last year. The Mallon Cup Challenge, the second of the three FJGA majors, will be played Monday at Warwick Hills Golf and Country Club. The Henrickson Award will be contested July 13 at Atlas Valley CC.